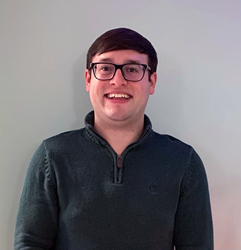 "Besides clean rooms, friendly service and affordable prices, we really want to be known for having an immersive arts experience."

Hotel Chicago West Loop has announced the appointment of a new, dynamic leader who plans to expand the property’s immersive art program in 2021. In his role as General Manager of the independent, 4-year-old boutique hotel, Andrew Hilliker is responsible for overseeing operations as well as maintaining prominence within the competitive marketplace as the hospitality and travel industries rebound from COVID-19. His primary strategy for elevating the guest experience moving forward centers on the hotel’s unique art and culture initiative.

“I’ve never seen anything like it,” said Andrew, a passionate hotelier who has worked his way up from bellman to GM. “The artwork at Hotel Chicago West Loop pulls you in and carves out a special spot in your memory. It’s truly what sets us apart.”

Hotel Chicago West Loop’s celebrated art concept, called The Annex, features a vast display throughout all four floors of public and private space. The hotel presents guests with a permanent collection of 2-D media in addition to distinctive exhibitions like guestroom street murals painted by prolific urban artists and a rotating gallery that features therapeutic artworks by patients with catastrophic impairments from nearby Shirley Ryan AbilityLab. The diversity of art represented is a tribute to the distinct neighborhoods found throughout Chicago. In 2021, Andrew plans to make the hotel’s art experience even more immersive with several new projects planned throughout the property (to be revealed in subsequent press release).

“Besides clean rooms, friendly service and affordable prices, we really want to be known for having an immersive arts experience,” Andrew added. “Beginning at check-in, our guests will be enticed to explore our different galleries and talk to our knowledgeable staff about the artwork.”

Andrews’s leadership style is just as visionary as his appreciation for the arts. His success strategy includes four pillars of excellence built around (1) employees, (2) guests, (3) bottom line, and (4) ownership. According to Andrew, everything begins with making sure his employees are happy and compelled to go above and beyond. He insists it’s about allowing team members to be individuals so they are comfortable and genuine when assisting guests in their own personal way. The benefits of this type of employee empowerment has already been evidenced by the fact that since he started as GM a few weeks ago and has motivated his team to engage with guests, Hotel Chicago West loop's TripAdvisor scores have gone up several points.

Although Andrew is a first-time hotel General Manager, his history in the hospitality field runs long. Andrew got his start in the industry when he was 14 growing up in Traverse City, Michigan doing odd jobs at the hotel his father general managed. Andrew recalls cleaning the lobby floor with a toothbrush as the spark that ignited his deep commitment. During college, Andrew worked summers in hotels while moving his way up through the ranks, from housekeeping to bellman to front office. Eventually, he worked his way to Operations Manager at Whitehall Chicago, then to Front Office Manager at Westin Chicago, before coming to Hotel Chicago West Loop in early 2019 as the Operations Manager. Andrew values his mix of branded and non-branded experience and plans to inject a hybrid of best practices during his new tenure as GM.

More About Hotel Chicago West Loop:
Hotel Chicago West Loop is a stylish boutique property that has been called one of the Top 10 budget-friendly hotels by USA Today. A stay here includes cultural immersion, as the dual-purpose “neighborhood hotel” doubles as a full-functioning art gallery. The Annex at Hotel Chicago West Loop encompasses the lobby, all four levels of guest hallway spaces, and select guestrooms with over 100 pieces of 2-D media including full room wall murals and both permanent works and rotating exhibits. To further support the local arts community, Hotel Chicago West Loop donates 10% of all regular room rates (when booked using promo code “ANNEX”) to designated local non-profit organizations that promote artistry such as Shirley Ryan AbilityLab.