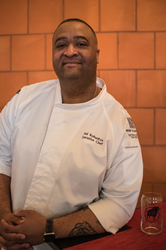 “It is a privilege to be able to work with someone of Chef Paul’s caliber on a daily basis. His years of experience and dedication to his craft come through in everything he does,” said Jonathan Whitwell, Food and Beverage Director.

Hotel Valencia Santana Row is excited to announce that Chef Paul Rohadfox, who first joined Hotel Valencia at its inception, has returned to head its kitchen as Executive Chef.

“It is a privilege to be able to work with someone of Chef Paul’s caliber on a daily basis. His years of experience and dedication to his craft come through in everything he does,” said Jonathan Whitwell, Hotel Valencia Santana Row food and beverage director. “His influence in the kitchen can already be felt this early on and we are looking forward to taking our established culinary program to the next level under his guidance.”

Chef Rohadfox, originally from New York, received culinary training at the Culinary Institute of America after retiring from the United States Marines.

He has held numerous positions at prestigious hotels and restaurants, including:

Due to his extensive experience, Chef Rohadfox’s repertoire includes a wide-range of culinary flavors and techniques. He has also received numerous awards, such as “Best New Chef” at the “Rumba at the Rotunda” in downtown San Jose and Second in “Small Plates” by The Zagat Survey.

Additionally, his skills have been recognized during exclusive events and celebrations Chef Rohadfox participated in including:

Chef Rohadfox has also lent his skills to philanthropic efforts, including a regional occupational program to mentor aspiring chefs through John F. Kennedy High School in Fremont, CA.
Hotel Valencia Santana Row was named the #1 hotel in San Jose by Conde Nast Traveler, #2 in San Jose by US News & World Report and one of the Top 100 Hotels in the World by Expedia.

About Valencia Hotel Group
Houston-based Valencia Hotel Group is a fully integrated hospitality company that provides management, development, branding and repositioning services for independent, full-service hotels owned by the company, in addition to third parties. Exceptional service, style and location have become brand trademarks. Earning both national and international recognition for their distinctive designs, amenities and settings, Valencia Hotel Group properties are destinations and gathering places within their respective communities, some further benefitting from and enriching their space within the cultural heart of a city. The company continues to forge a niche with hotels that anchor and add value to urban, mixed-use environments, which further support or enhance the guest experience with superior residential, restaurant, retail and office components. The Valencia Hotel Group portfolio currently includes the Valencia brands: Hotel Valencia Santana Row in San Jose, CA and Hotel Valencia Riverwalk in San Antonio, TX. In partnership with developer, Midway, include Valencia Hotel Group’s The George™ in College Station, TX and Hotel Alessandra in Houston, TX. The Court concept brands include Lone Star Court in Austin, TX, Cavalry Court in College Station, TX, Texican Court in Irving, TX and coming soon Cotton Court in Lubbock, TX. For more information, please visit http://www.valenciahotelgroup.com.