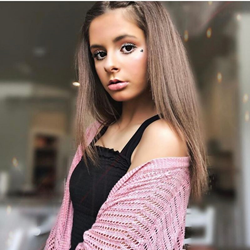 “Brooklyn is one to watch! Her talent is the real deal,” T-Wayne, Platinum Recording Artist and Billboard Top 10 Producer stated.

Today, independent Singer/Songwriter Brooklyn Van Zandt releases her new single, “Sidewalk Stars,” written and composed by Brooklyn. Flying from a small town in Texas to Los Angeles for the first time to pursue her dream was the inspiration for this heartfelt new song. The beautiful flowers everywhere and the realization that so many people arrive in Hollywood with big dreams too, left her speechless. “Sidewalk Stars” captures the enchantment of so many young dreamers.

“Brooklyn is one to watch! Her talent is the real deal,” T-Wayne, Platinum Recording Artist and Billboard Top 10 Producer stated.

“Sidewalk Stars” is available now on all streaming platforms.

Covid 19 quarantined the family but didn’t hinder singer/songwriter Brooklyn Van Zandt. It gave her the time she needed to release her first single, “Don’t” for her 7 million HouseofBrooklyn Tik Tok and Likee social media fans. The overwhelming response from them solidified her goal to set music trends instead of following them. “The world needs music now more than ever. I have too many songs written that need to be shared with the world,” stated Brooklyn. “My goal is to release one of my songs every six weeks for the rest of this year and beyond.”

“Social Media has been a huge steppingstone for many of us. I am excited for Brooklyn as she launches her singing career too,” stated Dominic Tolivar, award winning Social Media Influencer of short form, online comedy. “Watch out music world, here she comes.”

About Brooklyn Van Zandt
Brooklyn Van Zandt is best known as a Social Media Influencer, Actress, model and independent singer/songwriter who rose to fame after gaining over 7 million followers on Social Media apps including Tik Tok, Likee, Instagram and others under the username HouseofBrooklyn. Born on April 22, 2006 she’s been represented by the Kim Dawson Agency since she was six months old. Brooklyn is a professional model/actress who has been featured in numerous retail print ads, SAG Screen Actor Guild (SAG) commercials and is a member of the Broadcast Music Inc. (BMI). Brooklyn is a full-time student who successfully balances her social media and singing career with AP classes, cheerleading, track, family and friends. Along with her parents, Jay and Misti Van Zandt, she has two older brothers, Austin and Ethan.

And I’m speechless
That is my weakness
And when I’m left with no words
I can rely on the....
UH OH
UH OH