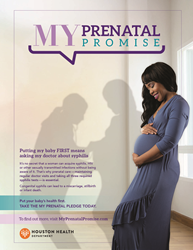 The new campaign, called “My Prenatal Promise,” targets women of childbearing age (16-44), and emphasizes the importance of prenatal care and getting tested three times for syphilis, as required by Texas state law. The goals are to increase awareness about prenatal care and its link to the prevention of congenital syphilis, to promote the prevention, diagnosis and treatment of syphilis and to educate and encourage women to get tested for syphilis, HIV and other sexually transmitted infections (STIs) during pregnancy. The campaign emphasizes three actions: “Talk, Test and Treat.”

Marlene McNeese, assistant director of the HHD’s Division of Disease Prevention and Control, added that many pregnant women are unaware of the importance of getting tested regularly for STIs.

“The ‘My Prenatal Promise’ campaign is designed to educate, encourage and equip women with the information and resources they need to receive the best prenatal care for themselves and their babies so that they can stay healthy during their pregnancy,” McNeese said. “This campaign has the potential to reverse the rise in congenital syphilis cases in Texas and in the Houston/Harris County area.”

The integrated marketing campaign, developed in English and Spanish, will feature a series of communication elements focusing on the expectant mother and her doctor and on the mother and child to emphasize that pregnant women must get tested. The campaign will be anchored by the “My Prenatal Promise” website, three 30-second public service announcements (PSAs) for broadcast TV and cable networks, two 15-second radio PSAs for urban and Spanish-language radio stations, multiple Facebook and Instagram social media ads, a YouTube channel and precision mobile/display targeting ads.

Another strategic pillar of the “My Prenatal Promise” campaign calls on expectant mothers to make a personal “My Prenatal Pledge” (MPP) to get tested for syphilis, HIV and other sexually transmitted infections when they visit the campaign’s website. The campaign also asks them to share the pledge on social media to increase awareness among other expectant mothers and all Houstonians.

“If you are pregnant or planning to become pregnant, it is important to get routine prenatal care and make certain that syphilis testing is a regular facet of that care,” said Lupita Thornton, HHD Public Health Investigation manager. “Pregnant women need to get tested for syphilis at their first prenatal visit, during the third trimester and at delivery.”

Statewide legislation formally enacted in September 2019 requires syphilis testing by doctors at three intervals of a woman’s pregnancy. Although syphilis is a sexually transmitted disease, congenital syphilis occurs when a pregnant woman is diagnosed with syphilis and passes the infection to her unborn child during fetal development or at birth — which can cause serious health problems such as premature and low birth weight infants, blindness, physical deformities, miscarriage, stillbirth or infant death.

About the Houston Health Department
The Houston Health Department (HHD) has provided traditional public health services for more than 180 years, seeking to use innovative methods to market the community’s present and future needs. Our mission is to work in partnership with the community to promote and protect the health and social well-being of all Houstonians and the environment in which they live. HHD is now the first health department in Texas and the second in a large U.S. city to earn national accreditation from the Public Health Accreditation Board (PHAB).