How Acts of Kindness Define Us: New Study Delves into the Minds of Good Samaritans

A recent study by PsychTests.com reveals that people who commit small acts of kindness are not just empathetic - they are also more likely to be resilient, good at resolving conflict, and have high self-esteem. 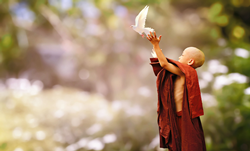 Aside from being kind, Good Samaritans are also open-minded, insightful, adaptable, and psychologically hardy.

When you commit a truly selfless act, it says a lot about your character.

People filming themselves doing good deeds has redefined the definition of “selfless act” and turned the sweet taste of compassion bittersweet. However, opportunists, influencers, and 15-minutes-of-famers aside, there are plenty of good things to say about people who commit small but genuine acts of kindness. A recent study conducted by PsychTests.com reveals that good Samaritans have more in common than just a generous spirit.

“When you commit a selfless act, a truly selfless act, it says a lot about your character,” explains Dr. Ilona Jerabek, president of PsychTests. “Real Samaritans don’t do acts of kindness for recognition or because they want something in return - they do it because they feel it’s the right thing to do; because it’s the human thing to do. And as we have seen in our study, generosity tends to strongly correlate with other beneficial traits, such as open-mindedness, strong self-image, keen social skills, and even mental toughness…so for those who think that being kind and compassionate is a weakness, our study says otherwise. Moreover, our study, like others, indicates that small acts of kindness don’t just serve the recipient, they can also benefit the giver. It can improve self-esteem, sense of well-being, mood, psychological and physical health, and life satisfaction. And you don’t have to be a philanthropist in order to enjoy these benefits - our Occasional Samaritans prove that even random acts of kindness can have a big impact.”

Want to assess your EQ? Check out our Emotional Intelligence Test at https://testyourself.psychtests.com/testid/3979

An act of kindness is a mirror into the soul.What does committing small acts of kindness say about you? Here are some of the traits that define Good Samaritans, Occasional Samaritans, and Non-Samaritans.