How and Why U.S. Citizens Are Retiring Early—InternationalLiving.com

Who doesn’t like the idea of retiring early and leaving the 9-to-5 grind behind—but how to afford it? The editors at InternationalLiving.com have a solution: Head to a better-value escape overseas (for a few years—or longer) and live better while spending less. A new report from the editors at InternationalLiving.com explores how U.S. citizens are retiring early—with a move overseas—and seriously stretching their retirement dollars. 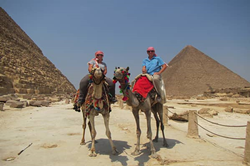 In 2011, Terry and her husband, Clyde, set off from Texas to enjoy early retirement in Panama.

"If you slash your cost of living by half (or more)—you can retire years earlier than you expected. And most folks who’ve done it say they live better than they ever did back home."

“Our correspondents on the ground have noticed more younger expats refusing to postpone retirement—opting, instead, to retire early overseas in places where the cost of living is a small fraction of what it is in the States or Canada,” says International Living Executive Editor, Jennifer Stevens.

“But in the right places overseas, you don't have to do any of that. If you slash your cost of living by half (or more)—you can retire years earlier than you expected. And most folks who’ve done it say they live better than they ever did back home.”

An example, according to International Living’s new report, The Joys of Early Retirement, How To, Why and How We Did It is Terry Coles and her husband, Clyde who, in 2011, set off from Texas to enjoy an early retirement in Panama.

“Like most people in the U.S., we were living the ‘American dream,’” says Terry. “Two cars with hefty monthly payments, a mortgage on a house with extra expenses for property taxes, flood and hurricane insurance, utility bills, gym membership, and plenty of credit card debt. We had little to no money in the bank saved for a rainy day, let alone any saved for retirement.”

Clyde was a career firefighter and paramedic for thirty years in Corpus Christi, Texas where Terry worked in medical offices.

“Although Clyde loved what he did for a living, he also knew that running into burning buildings was not something that an old man should be doing,” Terry says. “Throughout his career, he had always dreamed about retiring early and had the number 57 etched in his brain, when I would be just 51.”

The Coles’ combined income was around $85,000 and the couple knew their health insurance was going to cost $1,400 a month, which left them around $2,800 per month to live on, if they retired early as planned.

“Then Clyde had a brainstorm and approached me with the idea.,” Terry explains. “He said, ‘if I can find a place outside of the U.S. where we can live comfortably on my pension, would you go?’ I said, ‘sure, where are we going and when?’”

“Panama seemed like the best choice for us. It offered a hot, year-round climate which we were used to having lived in south Texas, was close to the U.S., offered a great retirement program, and good healthcare,” says Terry. “Neither Clyde nor I had ever traveled internationally before which made this dream of ours sound even crazier. But after just one exploratory scouting trip to Panama, we decided to make the move.

“Our first rental in Panama was a three-bedroom, private house that was just three years old at the time. It was lovely with shiny, white tiled floors throughout, fruit trees outside, and the cost—just $300 a month. After enjoying life there for six months we found the perfect house to buy with the money that we had managed to save prior to the move.

“For just $90,000, we bought an older home with four bedrooms and three bathrooms on an acre of land with plenty of fruit trees and tropical plants.

“We lived like royalty on Clyde’s small pension with extra money to spare. I could see an English-speaking doctor for around $20, a mammogram cost just $25, and I had a full hysterectomy for $4,500 paying out of pocket, which included three days in the hospital. Healthcare was good, affordable, and many doctors spoke English.”

For five years, the Coles enjoyed warm, tropical breezes, made plenty of new friends, and achieved a basic understanding of Spanish. They were enjoying their new life and thought they would stay there forever, until they took a vacation to Europe and fell in love with the romantic notion of living there.

“Life in Panama was wonderful until I convinced Clyde to take our first-ever trip to Europe,” says Terry. “We fell in love with the idea of travel and knew that it was time to move on and live somewhere else. Moving abroad had given us the guts to explore more of the world.”

For the next two years, they lived as nomads, owning nothing except what was in their small suitcases. The profit made from selling their Panama house would help to fund their travels around the world. But to travel inexpensively they became house and pet sitters. They were given free accommodations and in turn, they cared for a home and pets, while exploring whatever country they were in.

“Our friends on social media thought that we were rich because we could afford to travel the world,”” Terry says. “But what they neglected to understand is that we owned nothing and had no monthly expenses.”

In 2018, a house-sit took them to Portugal and they knew they’d found a place they wanted to call home. After a spell living on the Silver Coast, they’re now enjoying expat life in the sun-soaked Algarve region.

“For the past three years, we have enjoyed living as Europeans in a country with warm, welcoming locals, gorgeous beaches, stunning landscapes, and affordable, old-world charm.

“Clyde and I were able to retire early because we left the U.S, gave up our stuff, and were willing to embrace a new lifestyle. Still today we have no debt, credit card, or otherwise. We live within our means or below it, to save money for future travel.

“My advice to anyone thinking about early retirement abroad is this: Move abroad with an open mind, plenty of patience, and be willing to embrace the differences. And remember, just because something is different doesn’t mean that it’s wrong, just different,” Terry says.

“The past 10 years of my life have been something that only dreams are made of. I have absolutely no regrets about leaving all that I knew to jump head-first into the unknown. If we could do it so, can you, if you dare to take the plunge. A life of adventure, affordability, and leisure is waiting.”

More information on retiring early—and for less—overseas, including more stories from expats who are already enjoying an early retirement overseas — can be found, here: The Joys of Early Retirement, How To, Why and How We Did It.