How Boomers Can Learn Spanish at Home–International Living

A new report from the editors at International Living aims to debunk the common misconception that it is more difficult to learn a new language as people age. The report explores how Baby Boomers are successfully tackling the task of learning Spanish and why now—as everybody stays home—could be the ideal time to take on the challenge. 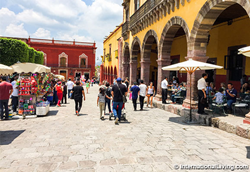 "Instead of memorizing, Boomers learn by what is called ‘patterning,’"

“Can older people learn to speak another language?” That’s a common question asked at International Living events worldwide by the mostly Baby Boomer attendees. According to a new report from International Living, the simple answer is: Yes, soon-to-be retirees and those already retired can learn another language successfully… when given the right tools in a simple, repetitive way.

The report examines techniques specifically designed for older learners, which differ from those methods used most often with younger students.

“While in college, I took a course called Brain Based Learning,” says Warren Hardy, Founder of Warren Hardy Spanish, a Spanish-language school in San Miguel de Allende, Mexico, which caters primarily to older learners. “This theory was based on the idea that not all brains learn the same and so a general curriculum doesn't work for all students. The idea was to study the specific brain you are teaching and find out how that brain learns best.

“When I moved to San Miguel de Allende, Mexico in 1990, I began teaching but I quickly found that students over 60 could not memorize and that they didn't want to learn grammar. The methods and content that I had successfully used to teach younger executives were suddenly thrown out the window. Both I and my students were frustrated. Mature students just wanted to be courteous and know enough Spanish to get around.”

According to Hardy, Boomer students suffer from what he calls C.R.S. “Can't Remember Stuff.” So how, he asks rhetorically, does the older brain learn, if it can’t remember stuff?

“Don't laugh, all of us over 55 suffer from C.R.S!” says Hardy. “I began to research how a brain over 60 learns and I soon found out things that dramatically changed how I thought about learning and teaching.”

“Instead of memorizing, Boomers learn by what is called ‘patterning,’” explains Hardy who has seen over 20,000 students pass through the doors at his Warren Hardy School.

“Patterning is the repetition of a meaning pattern until that pattern sticks in the brain. It has to be logical and meaningful. Once that pattern is learned, then it can be used to gently layer on new information.

“I knew that my students wanted to learn to get around. They wanted to be courteous and tell people what they needed. With that in mind, I developed a system of learning based on expressing needs and wants. A simple pattern like ‘I need’ combined with another verb and a noun. For example, I need to study Spanish, I need to pay the bill or I need to use the bathroom.

“I also learned that each pattern needed to be repeated at least 21 times to be remembered.”

Empowered with this knowledge, Hardy began to create his own course curriculum, based on what he calls Power Verbs.

“At first, I used handouts in the classroom and slowly honed my course,” he says. “I found that all students, no matter the age, succeed. The Power Verbs pattern works for everyone.

“But there was still the issue of mature learners not being able to focus for long periods of time because language learners tend to study in spurts. They can't go to class for months at a time, and they need to continually go back and review.

Thus, Hardy says, he saw a need for an online program that travelers to Spanish-speaking countries, would-be expats, and folks already living abroad could learn with from home, whenever it was most convenient for them.

“I created from my in-person program an online video course called the Warren Hardy Online Webtutor, which, today, has been used successfully by thousands of expats and Boomers worldwide.”

Today, Hardy argues, is as good a time as any to give a new language a try. With everybody sequestered at home, he says, learning online makes good sense.

More information on learning Spanish can be found, here: How to Learn Spanish