How Do You Measure the Growth of Society, and What Factors Aid or Hinder This Growth? 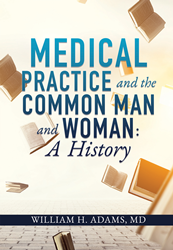 Authoritarian governance, the perennial plague of mankind, emits its poison by controlling the common man and woman

Adams has abridged his three-volume work The Natural State of Medical Progress (Liberty Hill Publishing, 2019) into this more streamlined volume. Using medical advances as the gauge for societal progress, he identifies the features of Western Civilization that have allowed medicine to reach its current success, as well as the threat hanging over it.

“Authoritarian governance, the perennial plague of mankind, emits its poison by controlling the common man and woman,” said Adams.

William H. Adams, MD, FACP, DCMT (London), began his search for the natural state of medical practice while on the staff of a large municipal hospital in New York City. Dissatisfied by aspects of medical practice as incorporated in recent decades, he continued the search after retirement which, after twenty years, has culminated in this three-volume testimonial to the role of group freedom in human progress.

Xulon Press, a division of Salem Media Group, is the world’s largest Christian self-publisher, with more than 15,000 titles published to date. Medical Practice and the Common Man and Woman is available online through xulonpress.com/bookstore, amazon.com, and barnesandnoble.com.