How small businesses can thrive through a recession to come out bigger and more successful than ever. 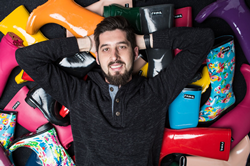 “Have faith, simplify, run a tight ship, and persevere. The world will not be in this financial crisis forever. Now more than ever, small business owners should take the time to remember why they started their brand."

Starting a business during a rocky economy is a risk most aren’t willing to take, but ROMA Boots founder and CEO, Samuel Bistrian, is living proof that economic wealth isn’t the deciding factor of whether or not a business succeeds or fails.

Buy one give one companies have come and gone but ROMA Boots is here stronger than ever for their 10 year anniversary. Bistrian launched the brand in 2001 during the last recession. Although he’ll admit difficult economic times certainly presented challenges, it’s the passion behind ROMA that has helped him thrive through the highs and persevere through the lows.

“Yes, we've had challenging times along the way, but It's all worth it when you see the number of lives that have been impacted,” explained Bistrian when asked how he dealt with some of the lowest points since launching the brand.

The company’s business model combines for-profit fashion with philanthropic initiative. A year before leaving Neiman Marcus to start ROMA Boots, Bistrian met TOMS founder Blake Mycoskie and was inspired by his give back campaign. Growing up in a poor village in Romania, the idea of providing boots to children in need hit home, especially as he returned to visit in 2001 and found children were still growing up without adequate footwear for the wet, cold climate. Little did he know, 10 years later that same experience would be multiplied all over the world.

“10 Years ago when I started ROMA we were in a financial crisis as a nation, but I was a risk-taker. The passion that I had to break free from the confinement of a regular job and being an employee, prevailed over any fear I had of the uncertainty of the economy,” said Bistrian.

The fashionable footwear company offering boots for everyone in the family is just as popular for its stylish rubber kicks as it is for its heart-warming cause. For ROMA Boots, 2019 was the biggest year on record through expansion and focusing more on wholesale. The brand continues to launch new designs that are becoming must-haves for the rainy spring season.

After a decade in business, “giving poverty the boot” still remains at the heart of ROMA’s charitable causes as a new pair of boots is donated to a child in need with every purchase made. Last year Bistrian estimated that the brand donated around $3 million worth of footwear to children internationally since going into business. This fall, the brand will be donating 10,000 boots in the U.S.

When asked what Bistrains’s advice to small business owners who are having a hard time staying afloat during Coronavirus, his words of affirmation are simple.

“Have faith, simplify, run a tight ship, and persevere. The world will not be in this financial crisis forever. Now more than ever, small business owners should take the time to remember why they started their brand. Use that passion to drive and shift your business plan accordingly to stay motivated and be patient as you continue to reach your goal.”

Holding the title of “America’s Favorite Rain Boot,” it’s difficult to imagine how different the marketplace would be and how many children around the world would go underserved if one man didn’t step up during hard economic times to carry out his business plan.

About ROMA Boots: Founded in 2010 by Samuel Bistrian, the company name ROMA means love. After spending years working at Neiman Marcus, Romanian-born Samuel Bistrian wanted to take his passion for quality and customer service a step further by giving back to people in need. Following a “buy one, give one model” similar TOMS footwear, ROMA does the same with boots. Growing up in rural Romania, Bristrian knows how proper footwear can empower and inspire children to live their best lives and encourage them to spread their talents with the world. ROMA Boots are sold at boutiques across the U.S., Canada, and Australia. They’re also available online at romaboots.com and Amazon.