How to choose the right tool for the job: the Native Grapes Academy project isn’t sheepish about being bookish.

The Native Grapes Academy (NGA) program, through the Native Grape Odyssey brand has achieved the first stage of its goal to bring its attendees not simply the most up-to-date oenological information at the point of participation, but in a form that will be memorable and lasting: September saw the publication of the first of six volumes dedicated to the understanding of European quality wine and Italian and Spanish native grape varieties, with the second volume already in anticipation. 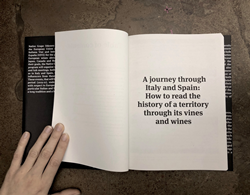 This project believes in the power of combining a precise technical knowledge with an ability to weave in personal experience and narrative, in order to spread the word about Spanish and Italian wines in way that is not only effective, but also inspiring.

A core part of the Native Grapes Academy Project over its three-year lifespan is the legacy it leaves behind. Whilst much of this will be realized through the education of wine lovers and professionals, creating a community of “heroes” ready to promote European quality wine, the other part is down to the materials it leaves in its wake. This is why the Native Grapes Academy Project has embarked on an ambitious publishing schedule in order to bring six new works into print over the next three years, leaving behind books to make the project live on.

Joining forces with wine geneticist Prof. Attilio Scienza and vine genetics researcher Serena Imazio, the Native Grapes Academy Project will produce two books a year bringing the topic of Spanish and Italian native grape varieties to life for the students attending the courses in Canada, Russia and Japan. Volumes two through six will take students on a journey following the cultural, historical and migratory paths of grape varieties around the Mediterranean, whereas the first volume acts as an introduction to the series. This initial narrative follows a fictional pilgrim as they journey along the ancient vinous roads to explore the origins of key grape varieties and provide an overview of the regions that will provide the foundation for the Native Grape Odyssey Maestro Course.

One of the pioneering aspects of the first volume is its comparative approach to the native grapes of Italy and Spain. Prof. Scienza traces the genetic and cultural ties of core varieties and examines their shared heritage, providing a comprehensive overview of how these two countries and their wine history are intrinsically linked. As he states, “Italy and Spain have always exerted a fascination on the world, for their position of greatness and majesty in the Mediterranean, where they have laid the foundations of a common history that still today shines in harmony and cooperation.” This analysis, laid out in the first chapter of the book, forms a bedrock from which the following chapters can expand and develop, and which, furthermore, will underpin the following volumes.

The Native Grapes Academy Project has perpetually emphasized the role of storytelling in the promotion and education of European quality wines. This project believes in the power of combining a precise technical knowledge with an ability to weave in personal experience and narrative, in order to spread the word about Spanish and Italian wines in way that is not only effective, but also inspiring. It was therefore the goal of the Native Grapes Academy Project book project to reflect this approach. Indeed Prof. Scienza highlights this by pointing out that “the consumer thinks, remembers and decides on the basis of ‘stories’” and goes on to explain that, “the story must also have narrative tension and the ability to go viral on the internet as well as social networks” demonstrating that storytelling remains a vital part of sharing knowledge about wine.

This latest Native Grapes Academy narrative is just the beginning: the Native Grape Odyssey Maestro course and Walk-Around Tasting will also be organized in Russia and Japan and continue to tell stories, share knowledge and search for the next wine heroes. Find out more information at: canada.nativegrapeodyssey.com/sign-up-form/

About: Native Grapes Academy is a project financed by the European Union and managed by Unione Italiana Vini and Interprofesional del Vino de España (OIVE) for the promotion of PDO and PGI European wines abroad, in particular in three countries: Japan, Canada and Russia. In order to achieve this, the Native Grapes Academy educational program will organize wine seminars, workshops and b2b meetings both in these countries and in Verona, Italy, inviting wine experts and influencers from these countries. These events, realized in the span of three years (2019-21) aim at creating awareness about European native wines abroad, in particular Italian and Spanish wines, which share a long tradition and a high standard of quality.