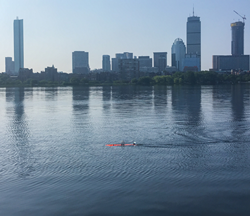 "Identifying UUV signatures and using those signatures to estimate a UUV’s speed for passive tracking is a relatively unexplored research area in comparison to other marine vessels," said Kristen Railey, who led the study as a Draper Fellow.

Detecting the presence of an unmanned underwater vehicle (UUV) is usually achieved by intercepting the noise radiated by its propeller. In a noisy harbor, this task is hindered because the acoustic signature of a UUV and the noise in the local environment often present too much signal complexity for current technologies to process.

That may be about to change. Researchers at Draper, Massachusetts Institute of Technology (MIT) and Woods Hole Oceanographic Institute (WHOI) have developed an acoustic remote sensing method for high-precision propeller rotation and speed estimation of unmanned underwater vehicles.

The new method is detailed in a study published in the Journal of the Acoustical Society of America.

UUVs are marine platforms that are untethered and autonomous and often used for a variety of applications, including national security and ocean exploration. The robots selected for this study belong to the smallest class of vehicles called micro-UUVs, which have a diameter of six or fewer inches.

Detection, classification and tracking of ships are important tasks for improving port security and the security of coastal and offshore operations, explains Kristen Railey, who led the study as a Draper Fellow. “However, identifying UUV signatures and using those signatures to estimate a UUV’s speed for passive tracking is a relatively unexplored research area in comparison to other marine vessels.”

A state of the practice technique for identifying the presence of ships is by analyzing passive acoustic data with the Detection of Envelope Modulation on Noise (DEMON). The DEMON method, which operates by filtering propeller noise, varies by vessel, and can be challenged in a noisy and dynamic environment such as the shallow waters of harbors.

In the study, the authors set out to isolate and characterize motor noise, so they focused on brushless DC (BLDC) motors because of their prevalence in UUV propulsion systems. They designed a passive acoustic, high-precision method for estimating a micro-UUV’s propeller rotation frequency.

Quieter UUVs could have many benefits, the researchers explain in their paper. “Understanding the origins of acoustic noise in autonomous platforms can inform quieter UUV propulsion design to avoid interference with onboard sensors and disturbance to marine life. In the future, based on these findings, quieting techniques for BLDC motors in UUVs can be compared and assessed.”

While the current work is focused on micro-UUVs, the new method can apply to other robotic platforms that are powered by mass-manufactured BLDC motors. Brushless motors are found in electric vehicles, hybrid vehicles, personal transporters and electric aircraft.

Co-authors of the journal paper include Railey, a Ph.D. candidate in mechanical and ocean engineering at Massachusetts Institute of Technology (MIT) / Woods Hole Oceanographic Institute (WHOI); Henrik Schmidt, Railey’s academic advisor and a professor of mechanical and ocean engineering at MIT; and Dino DiBiaso, a computer scientist, systems engineer and distinguished member of the technical staff at Draper.

At Draper, we believe exciting things happen when new capabilities are imagined and created. Whether formulating a concept and developing each component to achieve a field-ready prototype or combining existing technologies in new ways, Draper engineers apply multidisciplinary approaches that deliver new capabilities to customers. As a not-for-profit engineering innovation company, Draper focuses on the design, development and deployment of advanced technological solutions for the world’s most challenging and important problems. We provide engineering solutions directly to government, industry and academia, work on teams as prime contractor or subcontractor, and participate as a collaborator in consortia. We provide unbiased assessments of technology or systems designed or recommended by other organizations—custom designed, as well as commercial-off-the-shelf.