How Welfare Still Discourages Work—And Why That Must Change

Express Employment Professionals experts take a look at the U.S. welfare system—why it's not working and steps to fix it. 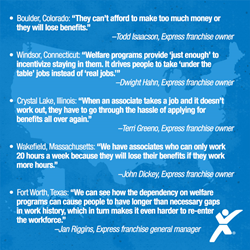 Work is too important and opens too many doors of opportunity for us to leave our fellow Americans trapped outside the workforce. Reform is needed to help people reach their full potential. - Bill Stoller, Express CEO

After nine straight months of an unemployment rate below 4%, many assume that everyone who wants a job has one. But as Express Employment Professionals sees on a regular basis, there are still many Americans who would like to work but choose not to—because taking a job would actually harm their financial situation.

Welfare programs in America are structured in such a way that they can create a disincentive to work. Express franchise owners witness this on a regular basis, hearing variations of a similar but unfortunate refrain: “I want to work but having a job would actually mean having less money.”

Welfare programs represent a complicated patchwork of federal and state programs with varying qualifications and levels of benefits. But similar effects are witnessed across the country:

As Express experts explain, this has consequences beyond the financial implications. Work provides vital non-monetary benefits including:


Dwight Hahn says, work “shows responsibility. It is good for self-worth, as well as mental and physical health. It allows people to contribute to society, provide for their families and give people hope and purpose.”

With all of this at stake, what is the solution?

“I think a decrease in benefits as a stepping stone when re-entering the workforce would be more beneficial than an either/or situation,” she said.

“It’s hard to blame anyone for making the financial calculation that under the current system they might actually be better off not working,” he said. “But we can’t stop there. Work is too important and opens too many doors of opportunity for us to leave our fellow Americans trapped outside the workforce. Reform is needed to help people reach their full potential.”