A revelation of the covert subversion of the U.S. by Mexican officials 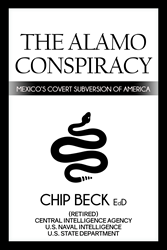 "Dr. Chip Beck has opened up a vital area of interest and concern,one of which every American citizen should be acutely aware."

History Publishing Company announces the release of "The Alamo Conspiracy," the book that reveals the true story of the origin of Mexican immigration to the United States, why it was initiated and by whom. Author Dr. Chip Beck, retired from the Central Intelligence Agency and the U.S. State Department brings the story to light, when it happened, the reason it happened, and the actual beneficiaries.

The author, a retired U.S. Government official with academic credentials in international relations, understands well, the motivations and actions of governments. He is a retired Navy Commander having served in Naval Intelligence, a career CIA Clandestine Service Officer, and a former State Department Foreign Affairs Officer who directed the prestigious ACOTA peacekeeper training program in Africa from 2005-2010. He served in, or witnessed, some two dozen wars, revolutions, and civil conflicts on four continents from 1969 through 2013. His military, intelligence, and diplomatic assignments, along with a penchant for personal travel, have taken him to 150 countries and territories on six continents. He came to know Mexico very well.

He also came to know the “whys and wherefores” of Mexico’s deliberate sponsorship of its own citizens immigration to the United States and how it would benefit Mexico’s position on the world stage.
“This is a story that has not yet been heard on television news shows nor read in political magazines,” said Publisher Donagh Bracken, ” Dr. Chip Beck has opened up a vital area of interest and concern; one of which every American citizen should be acutely aware. In this political year of critical revelation this story of covert subversion should be in public discourse.”

The Alamo Conspiracy has just been released and is available on Amazon, Barnes and Noble and other book websites nationwide. It is available to book stores worldwide through Ingram.