HRH Prince Emanuele Filiberto of Savoy, The Prince of Venice and The Prince of Piedmont, will be the Guest of Honor at the Savoy Foundation’s Second Annual Notte di Savoia Los Angeles Charity Gala at the Montage Beverley Hills on April 6, 2019 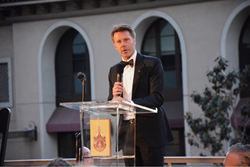 The Savoy Orders are my family’s ancient orders of knighthood which date back to the Crusades. They have traditionally been devoted to charitable works, and recognize individuals for their contributions in public service, medicine, the arts, music, government, business and philanthropy.

HRH Prince Emanuele Filiberto of Savoy will be the guest of honor at the second annual Notte di Savoia Charity Gala on April 6, 2019 in Los Angeles. The white and black-tie charity gala, taking place at the Montage Beverly Hills Resort, will benefit Caterina’s Club, which provides 25,000 weekly warm meals, affordable housing assistance, and job training to homeless and low-income families throughout Southern California. The Notte di Savoia has been organized by the American Foundation of Savoy Orders continuing the spirit and tradition of charitable giving and hospitaller care of the historic, dynastic orders of knighthood and merit of the thousand-year old Royal House of Savoy.

The elegant Mediterranean-style Montage Beverly Hills will provide the sumptuous surroundings for the Notte di Savoia, recreating the traditions and pageantry reminiscent of 19th century European court events. Following a glittering outdoor reception on the elevated terrace, dignitaries and guests, with gentlemen resplendent in tail coats and wearing colorful chivalric and military decorations, and ladies in formal gowns, will proceed to dinner in the Marquesa Ballroom to strains of historic Savoy royal anthems and marches popular when Italy was a monarchy under the House of Savoy.

The guest of honor, His Royal Highness Prince Emanuele Filiberto of Savoy, is the grandson of the late King Umberto II, Italy's last reigning sovereign. His ancestor, King Victor Emmanuel II, united the nation of Italy under his rule between 1861 and 1870.

Prince Emanuele Filiberto said: “The Savoy Orders are my family’s ancient orders of knighthood which date back to the Crusades. They have traditionally been devoted to charitable works, and recognize individuals for their contributions in public service, medicine, the arts, music, government, business and philanthropy. Caterina’s Club and the work of Chef Bruno Serato, a Savoy knight, is a great and contemporary cause to support in our royal tradition of assistance to the less fortunate, the Prince concluded ”

The American Delegation of Savoy Orders, through its charitable arm, the American Foundation of Savoy Orders, contributes to humanitarian, hospitaller and charitable projects and initiatives in the United States and abroad, particularly in healthcare and hospice care, disaster relief, education programs and children's causes. The Savoy Foundation is a NGO at the United Nations.

ABOUT THE ROYAL HOUSE OF SAVOY
The Dynastic Orders of the Royal House of Savoy http://www.ordinidinasticicasasavoia.it/ are among the oldest orders of Knighthood and Merit in the world. The Savoy Orders are headquartered in Geneva, Switzerland and have 35 Delegations worldwide that support the Orders’ ongoing charitable works. Their origins and their principles, traditions and humanitarian goals date back a thousand years. HRH Prince Victor Emmanuel, Prince of Naples and Duke of Savoy, is Head of the House of Savoy and Grand Master of the Savoy Orders. Prince Emanuele Filiberto is his son and hereditary Prince and currently serves as President of the Council of the Savoy Orders. Among his hereditary titles is Crown Prince of Italy.

In 1946, when the Kingdom of Italy came to an end, the House of Savoy was the Europe’s oldest reigning dynasty. The heads of the House of Savoy had ruled, first as counts, then as dukes and finally as kings, for almost a thousand years. Descended in the direct male line from a tenth-century vassal of the Holy Roman Emperor, the Savoys ruled the Alpine state of Aosta, as well as Savoy, where they established themselves at Chambery. Their dominion was eventually extended to include Piedmont and other territories in what are now Italy, France and Switzerland. By the eighteenth century, the Savoys were kings of Sicily and then Sardinia, and it was under their aegis that the Italian states were united by 1871.

The Royal Family’s heritage can be seen in castles and palaces, and in the beauty of the northwestern Italian city of Turin, the Savoys' magnificent capital in the heart of Piedmont in the 16th into the 19th centuries. The dynastic chivalric traditions of the House of Savoy continue. The Order of the Annunciation and the Order of Saints Maurice and Lazarus, two of the world's oldest knightly institutions, are still alive today, epitomizing the dynasty's medieval spirit while supporting very modern charitable works in Italy, Switzerland, France, Japan, the United States and elsewhere. Chivalry lives. Today, the House of Savoy remains one of the oldest royal dynasties.

The American Foundation of Savoy Orders, Incorporated, http://www.savoia.org a tax-exempt 501 (c) (3) charitable organization, supports local, national, and international charities focusing on medical, educational, and humanitarian fields, including philanthropy for hospitals and relief agencies for children, the poor, sick and elderly. The Foundation is a Non-Governmental Organization in Roster Consultative Statues with the Economic and Social Council of the United Nations.

ABOUT CATERINA’S CLUB
Caterina's Club's mission is to provide warm meals, affordable housing assistance, and job training to homeless and low-income families throughout Southern California. It is supported by a vision where we are creating a modicum of consistency in these children's lives through something as simple yet meaningful as a nightly dinner. http://www.caterinasclub.org/