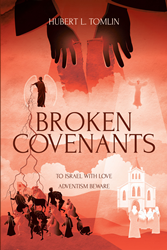 Tomlin shares, “Broken Covenants seeks to highlight the love of God for man and the things the Lord had been doing to bring man back into fellowship with Him since mankind fell from grace because of sin. Sin has corrupted the entire world, and it started when Adam and Eve were deceived by Satan in the garden of Eden. Satan had since that time gained control over the earth from Adam whom God had given this charge. Everything being corrupted by sin, including man, faces the curse of death.

“Satan having taken control of the earth had access to heaven where he was a continuous accuser of man before God. God is determined to destroy this corrupted earth and Satan with it to get rid of sin altogether, but He is also determined to restore man and save man from His wrath and the destruction to come.

“God sent a flood to destroy the rebellious people from the earth, but as man multiplied again in the earth, so did sin. The Lord then chose one man, Abraham, through whom He created the nation of Israel to be His chosen people. He blessed and prospered them to make the rest of the world be jealous of Israel that they would forsake their gods and seek after the Almighty to be their God. Israel, however, turned to the gods of these nations instead that God had to reject His people.

“God then sent His own Son Who never sinned, and therefore, death had no control over Him. Having conquered sin and death, Jesus has taken back control of the earth, and the devil is cast out of heaven and have no more access to heaven. Man is therefore restored, but he had to trust in Jesus and what He has done to be redeemed back to God. This is the way of salvation, and God now has accomplished that which was His determination since Adam.”

Published by Christian Faith Publishing, Hubert L. Tomlin’s new book offers readers an opportunity to be reinspired in their faith.

Tomlin’s dedicated study of scripture is presented within the pages of this thought-provoking discourse on Christianity.

For additional information or inquiries about “Broken Covenants,” contact the Christian Faith Publishing media department at 866-554-0919.