Recent release “Another Mile Nearer: Sonnets in the Style of William Shakespeare” from Page Publishing authors, Hugh Hairs, is a stirring source of inspiration and enlightenment for those who seek comfort and peace in words and verses. 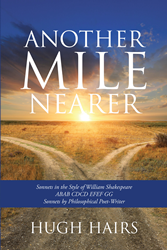 Hugh Hairs, a brilliant poet, has completed his new book “Another Mile Nearer: Sonnets in the Style of William Shakespeare”: a gripping and potent collection of sonnets that encourages one to think, ponder, and look at life closely.

Hugh Hairs was born in the midtown Borough of Lambeth on the south side of the River Thames on the first day of the Great Blitz of London, a National Day of Prayer, September 1940, when Hitler and his Nazi Luftwaffe launched Operation Sealion: ‘Today Europe, Tomorrow the World.’ He was educated at St. James’s Elementary School in Twickenham, Middlesex and at Gunnersbury Grammar High School in the West London Borough of Acton, Brentford and Chiswick. He graduated in 1959 and worked in London and in Richmond, Surrey, until he emigrated to America in 1964. Since then, he has resided in San Diego, San Francisco, Chicago, Provincetown, New York, and Miami until he settled in Oklahoma in 1977. He became a naturalized citizen of the United States in 1994, sworn in at the Federal Murrow Building in Oklahoma City, in the same location blown up by a misguided homegrown terrorist in April 1995. He currently lives in Waukomis, Oklahoma, since moving there in 1981.

Published by Page Publishing, Hugh Hairs’ inspiring tales withheld in verses of sonnets will take the readers on a fascinating experience through emotions and imagination that will move every heart.

Readers who wish to experience this great work can purchase “Another Mile Nearer” at bookstores everywhere or online at the Apple iTunes store, Amazon, Google Play, or Barnes and Noble.