S. Michael Wilson of Phillipsburg, New Jersey is the winner of the fifteenth annual Wergle Flomp Humor Poetry Contest sponsored by Winning Writers. 4,834 contestants competed from around the world. 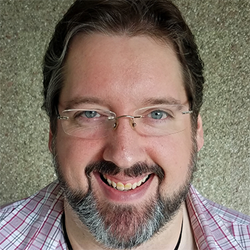 S. Michael Wilson is the winner of the 2016 Wergle Flomp Humor Poetry Contest

The humor builds as the speaker's language becomes more florid and sensuous, moving from embarrassment to excitement...

Winning Writers is pleased to announce the results from its fifteenth annual Wergle Flomp Humor Poetry Contest. S. Michael Wilson of Phillipsburg, New Jersey won first prize and $1,000 for his comedic poem, "Dick Candles". 4,834 contestants competed from around the world.

Jendi Reiter, final judge of the Wergle Flomp contest, said the winning entry stood out because it, "didn't stop with the initial joke premise, but creatively expanded on it, at just the right length. The humor builds as the speaker's language becomes more florid and sensuous, moving from embarrassment to excitement as he imagines different scenarios for making use of these phallus-shaped illumination devices."

Second prize of $250 went to Christina Myers of Surrey, British Columbia, for, "Tampon Bullet, Direct Hit". Reiter compared this poem to, "a modern-day 'I Love Lucy' clips reel, with one after another cringe-making and relatable moment of social gaffes. From the feminine product projectile that hits her junior-high crush in the chest, to losing her shirt in the car-wash vacuum when a cute guy walks by, our heroine is still a winner as long as she can laugh at herself."

Ten honorable mentions of $100 went to Danny Caine, Sarah Crowe, Laura Docter, Michael Forester, Ralph Gagliardo, Debra McQueen, George Northrup, Michelle Reiter (no relation to the judge), Garry Somers, and Vicki Wilke. The prizewinners are published online. The judging was assisted by poet Lauren Singer. $2,250 was awarded in total, making this one of the largest competitions in the world for humor poems.

The Wergle Flomp Humor Poetry Contest is sponsored by Winning Writers. Submissions for the 2017 contest are accepted online now through April 1, 2017. There is no fee to enter. For more information, please see winningwriters.com/wergle.

Winning Writers was founded in 2001 to provide expert literary contest information and resources to the public. In addition to the Wergle Flomp Humor Poetry Contest, it sponsors the Tom Howard/Margaret Reid Poetry Contest, the Tom Howard/John H. Reid Fiction & Essay Contest, and the North Street Book Prize for self-published books. Winning Writers is one of the "101 Best Websites for Writers" (Writer's Digest) and one of the "100 Best Websites for Writers" (The Write Life). Learn more at WinningWriters.com and join our 72,000+ Twitter followers at @winningwriters.

The logo of Winning Writers

Winning Writers has been recognized for excellence by The Write Life