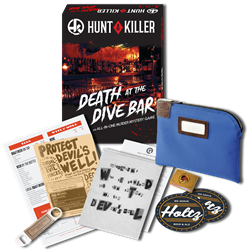 Death at the Dive Bar by Hunt A Killer

Hunt A Killer, the makers of the popular mystery, sci-fi, and horror themed games, announced that their first all-in-one game for the retail channel, Death at the Dive Bar, is now available.

A new case file has been opened on a grisly murder and evidence is mounting in new intriguing locations. Hunt A Killer, the makers of the popular mystery, sci-fi, and horror themed games, announced that their first all-in-one game for the retail channel, Death at the Dive Bar, is now available. The game can currently be purchased on Amazon, is available for pre-order online at Target.com, and will be on Target shelves nationwide on October 4th. This comes after the company announced their plan to release Death at the Dive Bar, and to expand into the retail channel while at the NY Toy Fair in February of 2020.

“We have reached new levels of excitement with our latest release, Death at the Dive Bar,” said Hunt A Killer CEO and Co-Founder, Ryan Hogan. “We’ve had a blast creating every aspect of this game and we’re thrilled that our players can now pick it up on Amazon and soon at Target.”

The new all-in-one game takes place in the seedy underbelly of the Old Scratch Tavern where players must uncover the truth of the seemingly accidental death of the owner before it’s too late. All of the clues will be featured in one box, but it’s up to the players to become the detectives, immersing themselves into the storyline to sift through each piece of evidence. Players will need to look through police and witness reports, letters written by the characters, and objects from the crime scene to solve the case.

“Our team has really delivered on creating immersive experiences, providing vivid storytelling and authentic clues, and it really shows with this new game,” said Hogan. “We are very excited to expand our business into the retail channel, and can’t wait for players to dive into this new mystery.”

Hunt A Killer has been on a roll, hitting new heights in 2020. Recently the company was featured as Inc. Magazine’s sixth fastest growing company in America, hit two million boxes sold, surpassed 100,000 subscribers, is launching a new horror season soon, and now has expanded its business into the retail channel.

To learn more about Death at the Dive Bar, or to purchase, please visit Amazon.com or Target.com. For more information on Hunt A Killer, please visit huntakiller.com.

ABOUT HUNT A KILLER
At Hunt A Killer, our mission is to revolutionize the entertainment industry by challenging conventional forms of storytelling. We provide interactive entertainment experiences that position participants as detectives looking to solve thrilling stories revolving around sci-fi, horror and mystery. Learn more at: https://www.huntakiller.com/.