Hurricanes Expected to Worsen in Next Decade; Coastal Residents Must Act Now

As 2019 comes to a close it marks the end of a decade, as well as the end to this year’s devastating hurricane season. Major hurricanes in the 2010s include Irma, Dorian and Michael—and affected communities are still recovering from each. With warmer waters and slower hurricanes expected to increase in the next decade, home design expert Randy Young warns coastal residents to take precautions now to save their homes later. 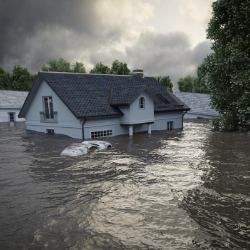 Randy Young, President of ArcDesign, underscores the need for coastal residents to take action to protect their homes in 2020 and beyond.

"The choice is yours. Sift through the rubble or lift to avoid trouble.”

As hurricanes occur with increasing frequency, particularly in the western Atlantic Ocean east of Florida and the Carolinas, weather authorities and other industry professionals are urging coastal homeowners to prepare now for flooding and other climate-related catastrophes. Climate experts predict bigger, more damaging storms as the planet continues to heat up. “The most effective way for coastal residents to protect their most valuable asset, their homes, is to raise it above the floodplain,” said Randy Young, president of ArcDesign. “Home lifting is the safest and most effective way to protect your home against these imminent storms. It could save your home in the long run.”

According to a report published in 2018, the increase in both the number and severity of hurricanes is attributable to warmer ocean temperatures and increased rainfall; a Yale study states that “the convergence of moisture into a storm not only leads to higher precipitation but also, for certain storms, greater intensity and growth [2].”

Warmer temperature fueling the intensity and frequency of hurricanes is only part of the problem. Experts predict the sea will rise one-to-four feet as it warms, which is expected to amplify coastal storm surge. Sea level rise is thought to have amplified the impact of Hurricane Sandy, which caused an estimated $65 billion in damages in New York, New Jersey and Connecticut in 2012. Much of this damage was attributed to coastal flooding [3].

Moreover, the frequency of the most damaging hurricanes has increased 330% century-over-century, according to a report published in November [4]. Industry experts say the goal of anyone living in a flood zone should be elevation in advance of a hurricane, rather than reconstruction after the fact. The belief that FEMA fully funds repairs to a severely damaged home is incorrect; the “FEMA 50 percent rule” mandates that any structure which is damaged more than 50 percent of the value of the home (minus the land value) cannot be repaired. It must be raised above the floodplain or demolished.

“FEMA guidelines and mandates are based off percentages, unfortunately, so many people who experience massive storm damage don’t recoup their losses. Therefore, it’s so important to elevate the structure before flooding, not afterward,” Young said. “I advise my clients elevate their homes if they live in a flood zone--not only does this give them peace of mind but it could save their homes when the flooded homes around theirs could be marked for demolition. It’s the smart thing to do.”

“It’s an insurance policy,” Young said. “The choice is yours. Sift through the rubble or lift to avoid trouble.”

About ArcDesign
ArcDesign, headquartered in Clearwater, Fl has been providing custom home design, renovations and permit designs for residents and contractors since 2003. With an unrelenting commitment to quality, they have been awarded the prestigious Best in Houzz Service Award six years running. Influenced by a multitude of 5-star reviews, clients often refer to ArcDesign as the home designers that people recommend. They excel in designs and permit drawings for new homes, additions, remodeling and rebuilding. ArcDesign also specializes in designs and plans for raising houses in flood zones to protect the homes from flooding. Randy Young is serving as Chairman of the American Institute of Building Design (AIBD) Tampa Bay chapter. For more information visit: https://www.arcdesign7.net