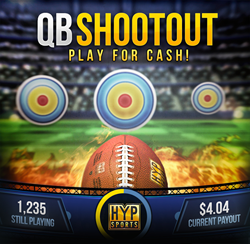 We schedule our free daily competitions on HypSports like traditional broadcasters program their lineups. Each event has a scheduled start time, and includes live hosts who call all the action." — Mike Taramykin, CEO of HypSports.

“We schedule our free daily competitions on HypSports like traditional broadcasters program their lineups. Each event has a scheduled start time, and includes live hosts who call all the action,” said Mike Taramykin, CEO of HypSports. “Each of our daily games offer cash prizes, but players are also incentivized to play our season-long fantasy games and earn bonus rewards that help them succeed in the daily contests. While we cater to the competitive nature of sports fans and offer them a variety of live competitions, we’re also expanding our offerings so that fans are constantly treated to new games and new ways to win.”

“We’re now talking to a variety of partners about integrating their brands into our competitions, as well as bringing our technology to their platforms. Plus, we’re already hard at work on our next release,” said Taramykin.

HypSports is available to download free on the App Store for iPhone and iPad, and Google Play for Android devices.

About HypSports
HypSports is developed by a team of sports games, mobile games, and fantasy sports veterans, with decades of experience developing sports-focused products. With a successful track record of more than two decades of hit video game development, the HypSports team knows sports fans and gamers. Their first company, Hypnotix, created the popular Outlaw Sports series before being acquired by Electronic Arts in 2005. At EA SPORTS, the team led the Tiger Woods PGA TOUR franchise and launched the first groundbreaking free-to-play versions of Madden NFL.

HypSports gamifies the world of sports and esports and delivers it all to fans in a single free-to-play app while building a community of live competition for sports fans and gamers alike. HypSports believes that the future of sports is in direct consumer engagement and microtransaction, creating new opportunities that go beyond traditional sponsorship, licensing and merchandising models. HypSports’ unique combination of sports, esports and live daily content creates always-on engagement for fans, teams, leagues and their sponsors.