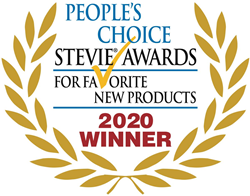 Winners of the crystal People’s Choice Stevie Awards, as well as all other winners in the 18th ABAs, will be celebrated during a virtual awards ceremony on August 5.

More than 3,600 nominations were submitted to this year’s American Business Awards for consideration in a wide range of categories. As an award recipient of Cloud Platforms and Network Security Solutions, iboss proves its industry-leading technology by being the only platform on the market to date that delivers all network security capabilities in the cloud via a SaaS offering.

iboss provides fast and secure Internet access on any device, from any location, in the cloud. The network perimeter has eroded, making traditional network security appliances ineffective at securing users and devices that are no longer bound by network boundaries. Built on a proprietary containerized architecture designed 100% for the cloud, iboss cloud secures Internet access from anywhere, including in and out of your physical network perimeter. Users are always connected to iboss cloud, regardless of device or location, to ensure all Internet traffic is secured for compliance, web filtering, malware defense and data loss at all times. Only iboss cloud can transition all of the capabilities found in traditional web gateway proxies and network firewall appliances to the cloud. This eliminates the need for traditional network security appliances allowing organizations to secure network traffic from anywhere, at any scale, while reducing costs and complexity.

“We are honored to be named as an award recipient in two categories of The People’s Choice Stevie® Awards for Favorite New Products,” said iboss Co-founder and CEO Paul Martini. “As employees continue to work remote, we are proud of our solution that is designed to enhance security and productivity while users access the Internet from any device, in any location. Since iboss cloud lives in the cloud, network security goes where users go with elastic and instant scaling to meet the demands of the cloud-first future.”

Details about The American Business Awards, the list of People’s Choice Stevie Award winners, and the complete list of Stevie winners in this year’s ABAs are available at http://www.StevieAwards.com/ABA.

About iboss
iboss is a cloud security company that provides organizations and their employees fast and secure access to the Internet on any device, from any location, in the cloud. The iboss cloud platform provides network security as a service, delivered in the cloud, as a complete SaaS offering. This eliminates the need for traditional network security appliances, such as firewalls and web gateway proxies, which are ineffective at protecting a cloud-first and mobile world. Leveraging a purpose-built cloud architecture backed by over 190 issued and pending patents and more than 100 points of presence globally, iboss protects more than 4,000 organizations worldwide. To learn more, visit https://www.iboss.com/.