iBUYPOWER Announces the Expansion of its Signature Element Cases

iBUYPOWER incorporates hardline tubing, the legendary Snowblind LCD side panel and a dual chamber layout in its new generation of cases available for system integration 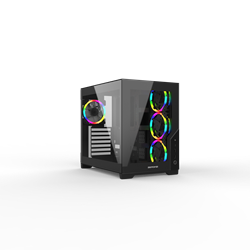 iBUYPOWER, a leading manufacturer of custom gaming PCs, today announced the expansion of its signature Element case line. The Element CL will be designed for easy integration of hardline custom cooling curated for pre-built systems while the Element Dual will provide users with ample thermal support and a clean internal layout for both pre-built systems and DIY enthusiasts.

Element Dual
For a different take on the traditional PC layout, the iBUYPOWER Element Dual features a binary chamber design. With the PSU mounted vertically on the bottom right side of the case and hidden behind the motherboard tray, users will be left with an open aesthetic on the left side and substantial space for maximum component compatibility; including: E-ATX and ATX motherboards, up to 400mm GPUs and 155mm CPU air coolers.

Mounting rails on the Element Dual provide support for the three included 120mm addressable RGB (ARGB) fans on the side and one included 120mm ARGB fan at the rear. Three additional 120mm fans can be added to the bottom and top of the case, as well, for flexible airflow paths. The open space of the Element Dual makes it possible to mount up to a 360mm radiator on the bottom of the case, 240mm on the side and a 120mm on the rear for optimal thermal support to keep systems running cool.

Constructed with a black, full-steel frame and paneling and a tempered glass front and side panel, the Element Dual will feature a solid premium build with a clear view of the internal system components. Dust filters cover the four air intake zones of the Element Dual located on the top, bottom and two areas on the right-side panel of the case to aid in thermal performance and reduce debris buildup. Users will have no shortage of connectivity with one USB 3.1 Type-C port, two USB 3.0 Type-A ports and one audio jack on the I/O.

Element CL
Designed with an integrated front panel distribution plate for easier bends and less complicated routing, the iBUYPOWER Element CL will bring the beauty and efficiency of hardline liquid cooling to customers looking to purchase a pre-built iBUYPOWER PC. Systems housed in the Element CL will also come equipped with custom water blocks for the CPU and GPU as well as custom fittings that will minimize the risk of tubes coming loose.

The Element CL offers a sleek and minimalistic exterior aesthetic. While the Element CL will be available in a black finish, iBUYPOWER will also produce a white Snowblind version of this case. The Snowblind CL will have all the features of the Element CL, including the front panel distribution plate, with the addition of the signature transparent 1280 x 1024 19” TN LCD side panel.

Element Dual
The Element Dual is expected to be available in quarter two of 2020. Pricing details will be released on a later date.