iBUYPOWER Announces the Next Generation of the Revolt Series 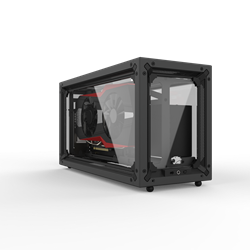 iBUYPOWER, a leading manufacturer of custom gaming PCs, today announced the next generation of its signature Revolt series. The Revolt GT3 will take on a new aesthetic compared to the asymmetrical design of its predecessors.

Housing small form factor (SFF) systems and providing support for ITX motherboards and SFX power supplies up to 750W, the Revolt GT3 will truly take on a unique layout. Systems constructed in the Revolt GT3 will be mounted to and suspended inside an outer frame by flexible rubber supports designed to add both cushion from shock and vibration damping.

With out-of-the-box external dimensions of 404 x 165 x 220mm, the Revolt GT3 will sport a rectangular shape with five tempered glass panels on the front, sides, top and bottom of the case. Each of the glass panels are framed by a mesh border and are reversible to increase part clearance and the overall dimension of the case to 414 x 185 x 230mm. To enable panel reversal, iBUYPOWER incorporated a neodymium magnetic bracket on the corner of each panel for easy attachment and detachment from the aluminum chassis frame. Users purchasing an iBUYPOWER system housed in the Revolt GT3 may have the option of selecting a mesh variant of the top and side panels for increased airflow.

Pricing and Availability
The Revolt GT3 is expected to be available for purchase in quarter two of 2020. Pricing details will be released on a later date.