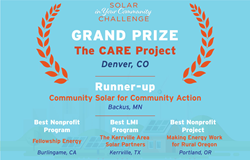 Winners of the Solar in Your Community Challenge, a $5 million competition launched in 2016 as a way to improve energy affordability and expand solar access to low-and-moderate-income (LMI) households, were announced by the Department of Energy (DOE) this week. A project led by the housing authority of the City and County of Denver, CO took the grand prize of $500,000. In total, the winning teams proposed 25.7 megawatts of solar energy projects across the country by 2020, benefiting more than 1,200 households and 18 nonprofit organizations through significant energy cost savings and community-level solar skill building.

“Bringing the next generation of energy technology to all Americans requires not just dollars but innovation and creativity,” said Marc Ott, executive director of ICMA, the Challenge’s prize administrator. “The Solar in Your Community Challenge meets this need through the power of local ideas and is yet another successful example of what’s possible through local and Federal cooperation.”

The winners were chosen from among 170 teams across 40 states, the District of Columbia, Puerto Rico, and Guam. The National Renewable Energy Laboratory, which evaluated all the teams in the competition, released a report detailing innovations tested by the program. “The report is sure to inspire other communities and nonprofits looking to expand solar access to underrepresented markets,” said Monisha Shah, Senior Energy Analyst. “The teams were able to demonstrate the technical, economic, and social feasibility of a wide variety of business models and approaches. The projects, if fully developed, would benefit nearly 50,000 households and generate 1,600 megawatts of solar,” she added. In addition to the winners, SETO recognizes 12 teams for their innovations in program design and ability to reach new markets.

Below is a breakdown of the winning projects:

Community Solar for Community Action (Backus, MN) - Runner-up, $200,000 prize
The Community Solar for Community Action (CS4CA) team was led by the Rural Renewable Energy Alliance (RREAL). The CS4CA team leverages LIHEAP, the nationwide energy assistance program, across all utilities and regulatory landscapes to serve low-income customers. The team deployed and integrated systems into the tribal energy assistance program, enabling the program to serve more families than have ever been served in the past. Since the energy assistance program is only serving 16% of the eligible population nationally, there is a significant unmet need which can be partially addressed at the national scale through CS4CA’s model. The team raised $1.9 million for “energy assistance integrated demonstration projects” funded by foundations, donations, fundraisers, and Solar in Your Community (SIYC) seed fund prizes. Additionally, funds, hardware, and time were donated. Going forward, the team will use the “Pay for Success” model, a rapidly growing financial enterprise intended to de-risk public sector innovation. Under this model, private social impact investors would provide the upfront capital to build RREAL’s CS4CA project assets for generating solar energy assistance benefits. Partners included the American Indian Community Housing Organization, Leech Lake Energy Assistance Program, and Southeast Vermont Community Action.

The Kerrville Area Solar Partners (Kerrville, TX) - Best LMI Program, $100,000 prize
Kerrville Public Utility Board (KPUB), a municipal utility in Texas, implemented a Power Purchase Agreement (PPA) with a solar developer to build and feed into KPUB’s distribution system. KPUB will receive 100% of the solar production and allocate the output towards LMI residents as well as the nonprofits acting as the host sites for the solar development. KPUB worked with property owners to identify multi-family properties in the Land Use Restricted Agreement and worked with the Texas Department of Housing and Community Affairs to prequalify low-income properties. There is no subsidy on the solar rate. Partnering with landlords and property managers for customer acquisition increases the number of LMI participants and eliminates the need for credit checks. Partners included Schneider Engineering, Texas Department of Housing and Community Affairs, RES Americas, and NextEra Energy.

Making Energy Work for Rural Oregon (Portland, OR) - Best Nonprofit Project, $100,000 prize
Making Energy Work for Rural Oregon was led by Sustainable Northwest and is a coalition of rural community leaders advancing community solar on public facilities throughout the state of Oregon. The team installed 120 kilowatts of community-led, community-financed solar over 4 nonprofit sites and created toolkits for rural solar best practices. The team’s model leveraged newly established programs, including the Oregon Clean Power Cooperative, to finance its solar projects. The overall goal was to ensure the cooperative is self-sufficient, which the team proved with one of its pilot sites. The team is in pre-development for three to six more megawatts of community solar projects by the end of this year. Partners included Oregon Clean Power Cooperative and a coalition of rural communities in Hood River, Lake, and Douglas Counties.

Fellowship Energy (Burlingame, CA) - Best Nonprofit Program, $100,000 prize
The Fellowship Energy team, led by Fellowship Energy, created a financing alternative, leveraging the broader, national religious affiliation of the Episcopal Church in the financial underwriting process. The team identified the Episcopal Church Building Fund (ECBF), one of many Church Extension Funds, when planning their two pilot projects in Virginia—a church and a parochial school. The church entered a long-term PPA with a Virginia-based investor, with a financial guaranty from the ECBF, which was then backed by the Diocese of Virginia. The ECBF also provided the sites with a pre-approved, long-term low-interest loan following the 60-month IRS compliance period during which the investor must own the array to capture the federal tax credit. The team is in pre-development for projects in New Jersey and California and have a longer list of interested parties. Partners included Performance Solar, Episcopal Church Building Fund, St. Stephen’s Episcopal Church, and Trinity Episcopal School.

About ICMA
ICMA, the International City/County Management Association, advances professional local government management worldwide through leadership, management, innovation, and ethics. ICMA provides member support; publications; data and information; peer and results-oriented assistance; and training and professional development to more than 12,000 city, town, and county experts and other individuals and organizations throughout the world. The management decisions made by ICMA's members affect millions of individuals living in thousands of communities, from small villages and towns to large metropolitan areas. ICMA gathers more data on local government than any organization except the federal government, spanning a broad spectrum from economic development to local government innovation.