Dave Wilson President of Preston Automotive Group sat down recently with Dealer Magazine to discuss how he turned his Automotive Group into a powerhouse using the internet and digital advertising. This is a summary of the interview and his new automotive digital marketing agency, iFrog Digital Marketing. 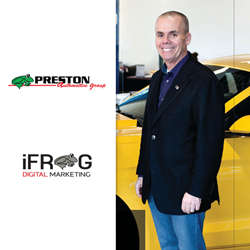 Dave Wilson started selling cars in 1977 in a small Ford dealership in Hurlock, MD. Within four years, he was a partner. Today, as the outright owner, Wilson oversees Preston Automotive Group’s 500 employees working at 10 dealerships, selling nine different brands. Wilson began leveraging the Internet in 2009 to transform the group into a Mid-Atlantic powerhouse.

The group sold more than 12,000 new and used cars in 2015. That small Ford dealership, Preston Ford, in a town of 600 people, today is one of the top 80 Ford dealerships in the country. In December, the dealership was Ford’s fourth best-selling store in the country with more than 500 sales. Meanwhile, at the urging of other dealers wanting to follow their lead, Dave Wilson started his own digital marketing company in April 2015 that is now helping other dealers apply the lessons he had learned. Dave recently interviewed with Dealer Magazine and shared some of the recipes for success.

Preston Automotive Group consists of 10 stores. The most recent store being a new Chrysler Dodge Jeep Ram store in Delaware. They also have four other Ford stores in addition to Preston Ford. Other brands include Hyundai, Lincoln, Mazda and Nissan, along with a commercial truck division, three body shops in Maryland and a couple of pre-owned centers (used car and truck facilities in Delaware and Maryland).

So how does one sell a ton of new vehicles in the middle of a rural area? Preston Ford, being the largest store of the Auto Group, has been able to turn its location into a DESTINATION using what is available to everyone, the Internet. In 2009, he figured that we could market ourselves across the country using the Internet and at the same time sell more cars by expanding their digital advertising reach. They began advertising themselves as having one of the largest inventory of new vehicles while being able to provide that small town environment for customers in other states that buy from the Preston stores.

Preston Automotive Group began taking their digital marketing in house in 2009 while learning which strategies and tactics worked best for their market. They explored a smorgasbord of vendors and digital marketing conferences to learn best practices. Seeing the digital successes at the Preston Automotive Group, prompted Dave Wilson to launch his own new business, a digital marketing firm called iFrog Digital Marketing. About a year and a half before deciding to launch, Wilson wanted to make sure we could deliver the same results for dealers across the country that we were doing for themselves. To do that, they built a business model that involved the dealers that they partnered with to have buy in with digital marketing and commit to having the same processes in their stores that Preston has in their stores.

iFrog Digital Marketing is 100% transparent about the Preston Automotive Group. They share their dealer rankings, where they are, closing ratios, analytics, social insights, etc. “We always share the best practices. We don’t share the best ideas. Anyone can have a good idea, but if that idea doesn’t work, it doesn’t get results. If you have a best practice that works and gets results, that is the one that we share with our partners” says Dave Wilson. iFrog continually strives to prove themselves daily across the Preston Automotive Group to be able to show their dealer partners that they partner with, what iFrog can do for them. The automotive digital marketing company also makes it their mission to never fall out of the “honeymoon stage” that occurs with many other automotive vendors. This means that month in and month out iFrog continually works with their partners, keeping them informed every step of the way and never let their customer service or other services fade away as new clients become partners.