iiRcade Adds 39 ColecoVision Games to its Expanding Library of Titles

Classic games from the early 80s such as Bump N’ Jump, Cosmic Adventure, Jump Man Jr and Venture being added to the iiRcade Store 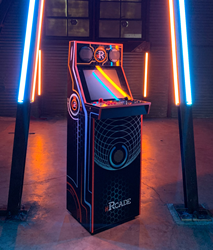 iiRcade Inc., the ultimate connected arcade machine for gamers of all ages to own and play their favorite retro and modern arcade games at home, is pleased to announce an agreement with ColecoVision that will bring 39 officially licensed, classic early 1980s games to the home arcade platform.

“I have very fond memories playing ColecoVision as a youngster in the eighties,” said Jong Shin, founder & CEO of iiRcade. “We’re thrilled to work in collaboration with ColecoVision and bring 39 of their classic games to iiRcade.”

Here’s the full list of ColecoVision games that will be added to iiRcade’s game library:

The new home arcade system features a growing library of 200+ licensed modern and retro games, both online and offline. Unlike other arcade devices, iiRcade is not limited to a few pre-loaded games, new games can be purchased and downloaded via the iiRcade store and software upgrades will also be made available to the platform.

iiRcade enables playing nostalgic retro arcade games as well as breath-taking modern games transformed into arcade games, and both online and offline multiplayer gaming, on a premium arcade cabinet. iiRcade allows for cinematic arcade gaming experiences via 19” High Definition display, 100W Dual Stereo Speakers, premium arcade controllers and the hardware and software that are optimized for gaming. iiRcade also has modern features built-in, such as WiFi 5, Bluetooth 4.2 and HDMI Out, that bring the arcade experiences to the modern world.