iiRcade will be available at Amazon, b8ta and Touch of Modern in Q4. 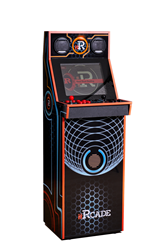 This is another major breakthrough for our home arcade system. We recently partnered with SEGA and now we’ll be selling iiRcade with the iconic retailers. We expect iiRcade to be a popular gift choice for the holidays.

https://iiRcade Inc., the ultimate connected arcade machine for gamers of all ages to own and play their favorite retro and modern arcade games at home, is pleased to announce the first wave of retail sales will be available in Q4 at Amazon, b8ta and Touch of Modern.

“We’re very excited to announce our first retail partners and look forward to offering iiRcade in-stores and online for retail purchase later this year,” said Jong Shin, founder & CEO of iiRcade.
“This is another major breakthrough for our home arcade system. We recently partnered with SEGA and now we’ll be selling iiRcade with the iconic retailers. We expect iiRcade to be a popular gift choice for the holidays."

iiRcade is currently live on Kickstarter with special editions available at early bird discounts until August 14, 2020. The popular new home arcade system has raised over $600,000 and counting, with over 200 modern and retro games, both online and offline, licensed for availability in the iiRcade game store.

iiRcade will be available both in-store and online starting in Q4 at b8ta locations across North America, as well as online at Amazon and Touch of Modern. Availability in more stores are expected to be coming soon.

Unlike other arcade devices, iiRcade is not limited to a few pre-loaded games, new games can be purchased and downloaded via the online game store and software upgrades will be made available to the platform.

iiRcade enables playing nostalgic retro arcade games as well as breath-taking modern games transformed into arcade games, and both online and offline multiplayer gaming, on a premium arcade cabinet. iiRcade allows for cinematic arcade gaming experiences via 19” 1280x1024 LCD display, 100W Dual Stereo Speakers, premium arcade controllers and the hardware and software that are optimized for gaming. iiRcade also has modern features built-in, such as Wi-Fi 802.11ac, Bluetooth 4.2 and HDMI Out, that bring the arcade experiences to the modern world.

For more information and to pre-order iiRcade, visit the Kickstarter campaign page and iiRcade.com.