iiRcade, the Ultimate Home Arcade with Online Platform that Enables Gamers to Download and Play Their Favorite Officially Licensed Arcade Games, to be Unveiled at CES 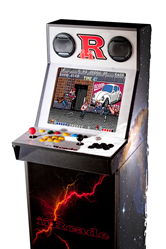 iiRcade enables you to play your favorite retro arcade games with the exact experiences as you remember, and the modern console-quality game titles that you love, in the arcade style.

iiRcade, a new home arcade machine that allows gamers of all ages to own and play their favorite arcade games at home, will be introduced at the Consumer Electronics Show (CES) in Las Vegas on Tuesday, Jan. 7 (Sands Eureka Park, Booth # 50710).

“I’m a long-time gamer who used to go to the local arcade to play video games like Double Dragon, Street Fighter and Pac-Man,” says Jong Shin, President and CEO of iiRcade, Inc. “Like many other arcade gamers, I always dreamed of owning my own arcade at home. As an adult, I was unable to make that happen because arcade machines are too expensive, too big for my home and most importantly, I would have to buy a new cabinet every time I wanted a new game. I wouldn’t be able to fit all these cabinets in my home.”

For his own enjoyment and for the countless number of long-time gamers, Shin created a solution with iiRcade – which combines the benefits of online connectivity with an arcade machine that gives players the ability to affordably download the officially licensed versions of the arcade games they love the most. With iiRcade, gamers can select and purchase a game they want on iiRcade’s app store, which is then automatically downloaded and installed on their iiRcade machine.

Shin says iiRcade is “the ultimate arcade machine for homes,” providing gamers with an online game store that allows them to download and play their favorite officially licensed arcade games. Unlike other arcade machines, iiRcade is not limited to a few pre-loaded games - so, in effect, it is like having the entire arcade put into one premium arcade machine.

“iiRcade enables you to play your favorite retro arcade games with the exact experiences as you remember, and the modern console-quality game titles that you love, in the arcade style,” Shin said. “iiRcade runs on iiRcadeOS, a customized operating system based on the latest Android core that is optimized for the most amazing gaming experiences, and is able to turn the best games developed on Android into the most intense arcade gaming you will ever play.”

Boasting today’s beautiful console graphics on high quality displays with the right arcade aspect ratios that fit all types of arcade games, and offering 80 watts of powerful stereo sound and top-quality arcade controllers, gamers will be able to feel the adrenaline-pumping experiences with heart-thumping thrills every time they play games on iiRcade.

iiRcade also offers easy, fast and fun gaming experiences via intuitive game menu and automatic controller configurations using iiRcade’s proprietary algorithm – which allow gamers to start playing a game right away, so that they can spend their valuable time playing games, rather than going through a frustrating process. iiRcade’s innovative convertible cabinet design turns iiRcade into a bartop arcade game for small rooms or into a full-sized arcade cabinet for mancaves and bigger spaces.

“The devices are beautifully and scientifically designed so that they are small enough to be placed anywhere in homes, but are big enough to play comfortably with others,” Shin said. “iiRcade brings premium arcade gaming experiences to your home at affordable prices.”

Before creating iiRcade, Shin says all that he could find were devices with illegally preloaded games where the list was made up of incompatible games, games that came out broken, games that ran slow and different versions of the same games.

“Not only were the games too difficult to find, they were difficult to use… with controller settings that had to be set up differently every time you switched to a new game,” Shin said. “Also, many of the games either didn’t work or played too slowly. Not to mention that all these games were preloaded illegally and there were too many games that were not my style, clogging up the game menu. That’s when I decided to create one myself. With iiRcade, you have an arcade gaming platform that plays all your favorite nostalgic retro arcade games that you remember along with the latest modern games with amazing graphics and immersive gaming experiences. iiRcade allows you to purchase only the officially licensed games that you want, easily and safely, and delivers the exact experiences that we remember from our youth as well as intense arcade action that we crave as gamers.”

Shin adds that iiRcade was built by gamers for gamers.

“As a team made up of gamers, we know what other gamers are looking for,” he said. “One of the greatest things about iiRcade is that iiRcade is upgradable, so we intend to continue introducing new amazing experiences for our users and continue to add the best games that they love – making iiRcade the best home arcade platform for all nostalgic gamers and modern game seekers alike”.

For more information and to keep up with product announcements, visit https://www.iircade.com/.