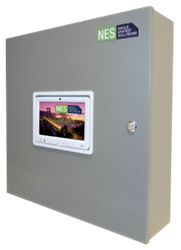 The NES garage control system routinely captures kWh and peak kW demand savings in the range of 95% – and up to 97% in many instances.

"To the best of our knowledge, this was the first-ever demonstration of using CONTAM’s dynamic control functions to model airflow patterns, contaminant concentrations and energy consumption in an enclosed parking garage ventilation application, and it led to novel findings on the effectiveness of the NES system,” stated Brent Stephens, professor and chair in the Department of Civil, Architectural and Environmental Engineering at IIT.

As part of the study, the IIT team investigated fan energy use, peak power demand and resulting CO concentrations for the respective control strategies under a variety of assumptions. As an example, each control strategy modeled scenarios reflecting “warm” starts, i.e., a vehicle’s catalytic converter is minimizing CO output, and “cold” starts, i.e., maximum CO concentrations are being emitted.

The four ventilation control strategies include:

“The IIT team’s findings firmly establish NES as the pacesetter in the garage ventilation controls industry,” stated NES Founder Frank Nagle. “The fact that the IIT team utilized empirical data provided by us buttresses NES’s innovative approach – including our measurement and verification methodologies – which sets the standard for what’s attainable performance and energy savings-wise.”

A downloadable version of the technical paper is available on Building Simulation at:
https://link.springer.com/article/10.1007/s12273-020-0677-3. Supplementary materials on air flow rates and fan power draw and peak demand can be found at: https://rb.gy/nw9exh. Terms of use include sharing, adaptation, distribution and reproduction in any medium or format, as long appropriate credit is given to the original author(s) and the source, a link is provided to the Creative Commons license (at: https://creativecommons.org/licenses/by/4.0/) and changes made are indicated.