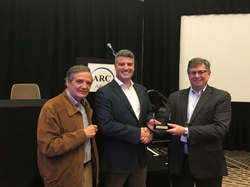 Each year the ISA100 Wireless Compliance Institute honors one end-user who has demonstrated exceptional leadership, creativity, and engineering excellence in the field of deploying ISA100 Wireless technology.

In winning, ILBOC was chosen from several potential candidates. Their use case was a 904 node ISA100 Wireless steam trap monitoring application. A steam trap monitoring application of this large size is a great example of the power of ISA100 Wireless technology. The installation also included a unique ESCO (Energy Services company) contract with Bitherm that had NO upfront costs. All payments to Bitherm from ILBOC are based upon energy savings.

Luis Sancho Gomez of ILBOC presented their experiences at the 2020 ARC World Forum in Orlando, Florida.

ILBOC is a joint venture (JV) between SK LUBRICANTS (South Korea, world leader in the lube base oil market) and REPSOL PETROLEO (first refining company in Spain). This JV was signed in 2012, same year of its plant construction started and only two years later, in 2014, ILBOC began its production becoming the biggest production plant of new generation lube base oils in Europe (Groups III & II), with a capacity of 630,000 tons per year.

Global monitoring of facilities and processes is a requirement in their Safety, Quality & Environmental (SQE) policies. Large-scale equipment monitoring (e.g. steam traps and valves) can be expensive and difficult to implement. The adoption and implementation of ISA100 Wireless has reduced costs related to installation of sensors and simplified the process of monitoring 904 elements (possibly the world's largest current ISA100 installation) by combining in a single management platform several applications:

Other remarkable features of this project are the following:

a. Solar powered. All ISA100 wireless transmitters and sensors have been powered by rechargeable batteries with small solar panels. This allows the battery life to be extended extraordinarily.
b. All-in-one architecture. The wireless network has been deployed by the powerful all-in-one CDS VR950 Gateway, which contains all the necessary components for network management and comes with advanced features such as redundancy and network collocation. This has strengthened the ISA100 wireless network, simplifying installation and commissioning while reducing costs.
c. System redundancy. A VR950 ISA100 Gateway pair assures full system redundancy. In case of a hardware/software failure, the system recovers seamlessly and completely.
d. Sandbox environment. Due to enhanced hardware capability, one can add applications on top of the VR950 for local processing and storage.
e. Channel blacklisting. Avoids congested channels due to interference and enhances coexistence with other networks such as Wi-Fi.
f. Field device auto-discovery. Enables the automatic reading of field device characteristics so that sensor/actuator data can be sent/received without additional manual configurations.
g. Intensive Maintenance. This project has allowed the implementation of Intensive Maintenance, a methodology based on Smart Leak Detection and Repair (SLDAR), which has brought enormous benefits to ILBOC.

ILBOC's leadership in the development and implementation of large-scale wireless applications for Oil & Gas is groundbreaking. WCI believes ILBOC's work will serve as inspiration to drive the industry forward.