Imagely, a leading provider of WordPress themes and plugins for photographers, announces the winners of $5,000 environmental and humanitarian photography grants. 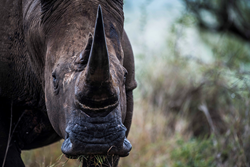 “Now, more than ever, we appreciate the power and importance of these impactful photography projects,” says Erick Danzer, Founder of Imagely.

The Imagely Team is excited to announce the two winners for the 2019-2020 grant cycle Peter Chadwick and Mary Calvert.

Environmental Category
Award-winning conservationist and wildlife photographer Peter Chadwick is named as the 2019-2020 Environmental Fellow for his long-term project Horns of Pain – Horns of Sorrow: The Psychological Impacts of Rhino Poaching. Chadwick has worked to document the impact of poaching on many of Africa’s iconic wildlife species for decades. His current project blends wildlife conservation with advocacy for the rangers who dedicate their lives to wildlife protection. Focusing on rhino poaching in southern Africa where roughly 8,000 rhinos have been killed for their horns, Chadwick’s project concurrently highlights the rangers and the personal stresses and sacrifices that they endure. In addition to raising awareness and funds for rhino protection, Chadwick hopes that this work also emphasizes the need for comprehensive psychological and financial support for rangers (and their families) who are injured or killed in the line of duty.

“Sadly, in today’s chaotic times, the earth and humanity are facing incredible challenges that threaten our very survival. Wildlife crime is one of these major threats and has horrific negative impacts on not only the world’s animals and ecosystems but also on humanity itself. Incredible organizations such as Imagely are crucial to enabling dedicated but often underfunded photojournalists to get out there and raise the plight of the world’s issues. It is therefore an absolute honor for me to have been chosen by Imagely as the 2019 Environmental Category winner,” says Chadwick.

“These rangers at the frontline of rhino conservation face enormous challenges and yet are often undertrained, under-equipped and under-supported. Thank you to Imagely for granting me this award so that this important issue can be kept in the headlines and can raise awareness of the impacts of wildlife crime and raise support for the ranger teams tasked with the protection of our wildlife and environments.”

Second Place in the environmental category goes to Matjaž Krivic for his work Lithium: The Driving Force of the 21st Century, which focuses on lithium mining, processing, and recycling. “Batteries are catalysts of massive changes in our time, both industrial and social. The boom of battery driven cars, phones and robots is causing the market for its core component lithium to soar, creating a modern-day gold rush with geo-strategic consequences. This project follows the value chain of this rare mineral, from investment and prospecting in the US, to mining in Bolivia, production of batteries and cars in China and to the small oil state Norway leading the way to electrify all of its transportation – cars, buses, planes and boats. This is the story of how lithium is changing societies and just possibly might have a role in saving our planet. But at a high cost,” Krivic says.

Third Place in the environmental category goes to Samantha Schwann for her project Hope Spots which documents successful conservation of the New Caledonian reef, the longest continuous barrier reef in the world. “New Caledonia exists as it does today because conservation has been in place for generations as part of their culture: it is a way of life. The population is a mix of the original inhabitants – the Kanak tribe, who primarily occupy the outer islands; Europeans, who primarily occupy the large island of Grand Terre; and Polynesians, who reside on both. The relationship between New Caledonians and the ocean will be incorporated as a key element of the project … The ocean is truly the earth’s blue heart: it produces between 50-85% of the planet’s oxygen, provides food, water, and our economies depend on it. Our survival is inextricably tied to healthy oceans, and time is running out. While the negatives are a call to action, it is equally important to spotlight the communities involved in successful conservation, as it provides inspiration and hope,” says Schwann.

Humanitarian Category
Award-winning photojournalist, Mary Calvert is named as the 2019-2020 Imagely Humanitarian Fellow for her project Dying for Justice: Suicide and Military Sexual Abuse. Calvert’s work focuses on sexual abuse and suicide in the military. Since 2001, rates of suicide for both male and female veterans have increased significantly — (30 percent for men and 62 percent for women) — but the rate is six times higher for veterans who have suffered from sexual trauma.

“My goal is to photograph at-risk veterans who are survivors of military sexual trauma who exhibit warning signs of suicide that include hopelessness, anxiety, rage, withdrawal from family and friends, substance misuse and engaging in overly risky activities. I will also visit inpatient and outpatient treatment programs. In addition, I will show the toll that suicide takes on surviving family members. With still photographs and video, disseminated in print, social media, gallery installations and seminars, I hope to enlighten lawmakers, the military and the public about the epidemic of MST related suicide,” says Calvert. “When I heard that I had been selected as the 2019-2020 Imagely Fund Humanitarian Fellow, my first thought was relief that I would be able to tell the vastly under-reported stories of veterans facing suicide after surviving military sexual abuse. So many veterans and their families are suffering, and we must not allow them to be forgotten.”

Second Place in the humanitarian category goes to Maranie R. Staab, for her long-term project, Living Proof, which documents the plight and the resilience of the Yazidi people in Bajad Kandala Yazidi Displacement camp in Iraqi Kurdistan. Staab has worked with community leaders and aid organizations since 2016 to highlight the experience of the Yazidi and created a series of photography workshops for young women to encourage them to tell their own stories.

“My belief in the power of images and storytelling is my constant motivation. We sometimes hear that photography can change the world. I believe that, but it’s not the images alone; it is what we do with them. It is how we choose to engage, and how we allow ourselves to be informed and changed. Many times, this change has shown its face in the acceptance of another way of life, and the willingness to identify with others. My hope is that the work might help move us, as a collective society, one step closer to embracing our shared, flawed, humanity,” says Staab. “As I continue to consider my impact in these types of spaces, I recognize the importance of a participatory approach; this type of workshop teaches a skillset and allows for those often marginalized to take part in their own narrative.”

Third Place in the humanitarian category goes to Anna Boyiazis for her project Finding Freedom in the Water, which documents a unique program that teaches women and girls in the religiously conservative Zanzibar Archipelago to swim — a much needed skill since drowning is a leading cause of death in the region. “Daily life in the Zanzibar Archipelago centers around the sea, yet the majority of girls (99% of whom are Muslim) who inhabit the islands never acquire even the most fundamental swimming skills. The conservative Islamic culture of Zanzibari … and the absence of modest swimwear have compelled community leaders to discourage girls from swimming. Until now. In recent years, grassroots organizations are making it possible for local women and girls to get into the water, not only teaching them swimming skills, but aquatic safety and drowning prevention techniques. Students are empowered to teach others, creating a sustainable cycle, and provided full-length swimsuits, so they can enter the water without compromising their cultural and religious beliefs,” says Boyiazis.

Judged by a prestigious panel of some of the world’s best-known environmental, humanitarian, and cultural photographers, the 2019-2020 Imagely Fund jurors included Jim Brandenburg, Steve Winter, and Ami Vitale. The Imagely team is grateful for the judges’ generous support and continued contribution to the photography community. This grant would be impossible without their passionate belief in supporting deep photojournalism.

Formerly known as the Photocrati Fund, the 2019-2020 Imagely Fund grant cycle represents the 7th offering of the Fellowship, and the first year for two grants. This represents $40,000 towards amazing environmental and humanitarian projects so far!

“Now, more than ever, we appreciate the power and importance of these impactful photography projects. We are thankful for all of the talented applicants who dedicate their lives to documenting important issues,” says Erick Danzer, Founder of Imagely. “It is truly and honor to support both the environmental and humanitarian photography communities, and we wish both Mary Calvert and Peter Chadwick the best of luck on their projects.”

About Imagely
Imagely is a leading provider of WordPress products and services for photographers. Imagely proudly sponsors the Imagely Fund, two $5,000 grants to photographers working on important environmental and humanitarian projects each grant cycle.

(c) Mary Calvert Connie Sue Foss was raped while in the US Army and has found it difficult to hold down a job to care for herself and her daughter. She bears scars from punching a window during a PTSD

(c) Matjaz Krivic Manuel and his family are traditionaly minig for salt at “Salar de Uyuni” since he was a child. They are the people that will get the most effected by the lithium mining in the area.