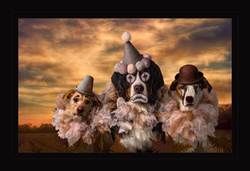 Barbara Breitsameter's "Send in the Clowns"

Professional Photographers of America (PPA) presented the Grand Imaging Award this week at Imaging USA 2017, the largest annual conference and trade show for pro photographers by pro photographers. The award went to Barbara Breitsameter M.Photog.Cr., CPP, for her image “Send in the Clowns” in the portrait category.

"I never would have anticipated or dreamed of this” said Breitsameter. "This image is more of me than anything I’ve ever created. It placed me in a whole new direction with my work.”

Breitsameter, for whom photography is “like breathing”, was selected as the overall Grand Imaging Award winner out of a pool of six category winners. The other winners were Jerry Ghionis M.Photog.Cr. (originally from Australia via California) in the non-event album category, Ted Linczak M.Photog.Cr. in the event album category, Dan McClanahan M.Photog. in the artist category, Ben Shirk M.Photog.M.Artist.Cr. in the illustrative category and In Sung Hang M.Photog. in the wedding category. Each category winner received a crystal award and a $500 cash prize. Breitsameter received a second trophy and an additional $500 prize.

The Grand Imaging Award winners have been judged to be the very best of the 2016 PPA International Photographic Competition (IPC). The Grand Imaging Awards encourage photographers to up their creativity by pushing themselves through competition with each other, their peers. The Grand Imaging Award winner was selected from 5,700 entries. Breitsameter's image was judged by a panel of over 40 jurors to be the very best of the 1007 images in this year’s loan collection. She was also chosen to represent the United States as part of Team USA in the World Photographic Cup, the “olympics of photography”, wherein 27 countries compete via images this February in Yokohama, Japan.

“This image came from a dark place of personal struggle,” says Breitsameter, who is living with Parkinson’s. “My dogs were acting silly and I realized they were my clowns. When I saw the image I knew immediately I would enter it into PPA’s International Photographic Competition.” Breitsameter feels the image represents how much humor has helped her fight and survive. “I love what I do. I have the best job in the world...I get to work with dogs.”