SFist launched in 2014 as the San Francisco iteration of the famed Gothamist news website. Following an unexpected hiatus, the local publication is now on course to be relaunched by Impress3 Media, the driving force behind the #20 fastest growing software company of 2017. 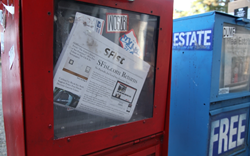 SFist rapidly grew to become one of the great digital publications serving the Bay Area. SFist’s fan base ballooned to roughly 300,000 social media followers and millions of readers within a few short years.

Impress3 Media, the driving force behind Impressions Holdings’ recognition as the #20 fastest growing software company of 2017 (Inc. 5000), proudly announces the acquisition of SFist and its related assets from New York Public Radio, today.

Impress3’s has acquired the SFist assets to bolster its mission to breathe new life into the struggling local news industry. It uses automation software and machine learning to assist writers and editors as they produce the most interesting content for readers in specific geographic regions or business verticals.

“Though we originally started off creating online industry magazines, it was always a hope that one day we could reverse the downward trend in local news as well,” says CEO Zack Chen. “Our software has proven itself capable of streamlining content production and distribution for some time, but now, through the SFist platform, we will begin to realize our goal of revitalizing local news.”

Founded in 2014, SFist rapidly grew to become one of the great digital publications serving the Bay Area. SFist’s fan base ballooned to roughly 300,000 social media followers and millions of readers within a few short years. From politics to entertainment to food, its witty and informative style of news resonated with those seeking to stay up-to-date with current events in Northern California.

In late 2017, to the dismay of its dedicated readers, SFist, Gothamist and the other “ist” sites shuttered, making headlines across the country. New York Public Radio acquired various assets of Gothamist in February 2018.

Chen went on to say, “Roughly 1,800 local papers have closed or merged since 2014 alone, and studies have shown that civic engagement declines when that happens. We decided that we cannot sit idly by.”

In fact, Impress3 launched a similar local news site aimed at serving readers in Massachusetts earlier in 2018. Called Up To Boston, this site has itself had hundreds of thousands of readers, almost entirely from the Greater Boston Area.

Impress3 Media was founded by San Francisco natives who are now wholeheartedly dedicated to bringing SFist back to life and allowing it to regain its position as a grassroots voice in the San Francisco community. Through local writers and staff, SFist’s reporting will bring regionally-focused topics back into the headlines.

Impress3 is a subsidiary of Impressions Holdings, a software company which has been acknowledged in business publications such as Forbes, Inc., Entrepreneur, Bloomberg, and the Business Times.