A preliminary report from the federal government shows U.S. trucker fatalities at a 30-year high. ATS’s John Kearney cites wider use of simulation training as key to accident reduction. 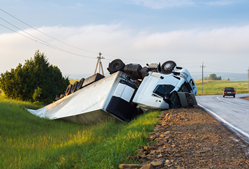 According to a US Department of Transportation report, trucking fatalities have reached levels not seen since 1988.

The bulk of these fatal accidents take place when a driver encounters something unexpected and makes a bad decision. The only way to make trucking safer is to improve truckers’ understanding of extreme situations through increased simulator training.

A U.S. Department of Transportation report compiling crash data for 2019, the most recent year for which these figures are available, shows that fatalities for large-truck occupants have reached their highest level in more than 30 years.(1) This, notes John Kearney, CEO of Advanced Training Systems, appears to be an ongoing trend; U.S. trucking fatalities for 2018 also exceeded a level not seen since 1988.(2) “The bulk of these fatal accidents,” says Kearney, “take place when a driver encounters something unexpected and makes a bad decision. The only way to make trucking safer is to improve truckers’ understanding of extreme situations through increased simulator training.”

As an example of bad decision-making in unexpected circumstances, Kearney, whose company is a leading designer and manufacturer of virtual simulators for driver training, among other applications, points to an accident that took place during a recent bout of extreme wintry weather in Texas. “When you have heavy traffic, freezing rain, and icy roads,” says Kearney, “you can’t safely maintain proper distance, drive at normal freeway speeds, or slam on your brakes. In Fort Worth, one morning last month, people did all three of those things at more or less the same time. The result was a pileup of 130-plus vehicles, including more than a dozen semi-trailer trucks, that left six people dead, and more than three dozen injured.”(3)

The purpose of simulation, says Kearney, is to allow students to encounter the unexpected—and make mistakes—in an environment in which there is no risk. This is standard procedure in other professions; recently updated Federal Aviation Administration standards, for example, are designed to make simulation training and testing more accurate and realistic in scenarios involving dangerous situations.(4) In medical schools, to take another example, simulation has become recognized as a standardized and safe method for training and assessing surgeons.(5)

While simulation is not yet as widely used in training commercial drivers as it is in training pilots and surgeons, Kearney has no doubt that it soon will be. High schools and vocational schools, he notes, are increasingly using simulators to prepare students for jobs in the rapidly expanding and relatively well-paid motor freight industry. Unlike other fields vying for these students, such as the fast-food industry, he notes that trucking offers high school graduates a career path and a future.

And if they are properly trained for it with the best technology available today, he adds, it offers not only a secure occupation but a relatively safe one. “While it is impossible to eliminate accidents altogether,” Kearney says, “it is not impossible to reduce them, both in number and severity. If you’re going for a commercial license—or know somebody who is—remember, virtual-reality simulation is the only way to learn where trouble lies and how to get out of it safely, both for yourself and others. If you make a mistake in a simulator, you don’t hurt anybody and you learn the right way to avoid them.”

About Advanced Training Systems LLC:
Advanced Training Systems (ATS) is a technology and engineering firm that has revolutionized the design and manufacture of high-tech simulator systems to improve training for operators of all types of motor-powered vehicles. ATS, the holder of multiple patents in its field, is dedicated to providing cutting-edge adaptive training at an affordable cost to all involved in the transportation industry, resulting in more qualified drivers/operators and safer streets. For more information, visit http://www.atstrainingsystems.com.