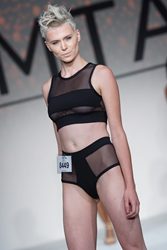 IMTA Model of the Year Madison Paige From IMD International, Medford, OR

You are going to be the next star.

IMTA recently celebrated the 55th IMTA Convention with an amazing modeling and talent event featuring many fantastic modeling and talent industry highlights in New York City. Fashion and commercial agents from around the world were at IMTA to network, scout, interview and most importantly to discover new faces. Talent agents, managers and casting directors came in force to find actors, singers, songwriters and dancers to represent.

IMTA Alum international top model Mariah Strongin spoke at Contestant Orientation saying, "IMTA is amazing for so many different reasons. I am from a small town and I came here to IMTA and have had the most amazing life ever since." Actor and commercial model IMTA Alum Moises Nieves said, "You are going to be the next star. All of you are talented. IMTA gave me all the tools I needed for success. My dream started with IMTA."

At the IMTA New York Dance Party, recording artists Paytra and B. Howard both performed great songs that got the whole ballroom rocking! Our Contestants also celebrated National Dance Day with the Dizzy Feet Foundation! They rehearsed a dance and performed it for the entire Convention during our New York Awards and Dance Party! The Dizzy Feet Foundation is co-founded by IMTA Alum Katie Holmes so it was extra special to do something to help raise awareness for her charity.

Callbacks were a major success for the models, actors, singers, songwriters, and dancers who met with the agents, managers, casting directors and industry VIP’s who were interested in representing them. Celebrity Drew Kenney, from The Bachelorette, co-hosted Awards Night with well-known actress Debra Rosenthal which featured the announcement of the Models of the Year, Actors of the Year and more.

An IMTA Model walks during the Designer Fashion Show