In 2005, Teen Cancer Patient Mikey Friedman Gave Away His “Wish” To Help Other Kids Cope With Cancer; Today His Legacy of Giving Has Served More Than 8K Young Patients

Mikey’s Way Continues To Help Kids Cope With Cancer By Providing Portable Wi-Fi Ready Electronics To Sick Children in Need of Escape From The Fear, Boredom, And Isolation of Long-Term Treatment. 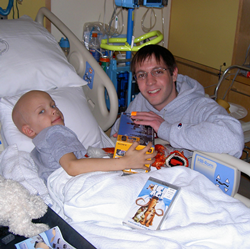 "Mikey knew from his own cancer experience that keeping your mind off treatment really does make you feel better." - Les Friedman, CEO of Mikey's Way Foundation and Mikey's Dad

As the excitement of the holiday season swirls around us, it is good to have reminders of what the spirit of giving is all about.

Mikey Friedman was 15 years old in 2005 when he learned that his rare and aggressive pediatric cancer had returned. Make-A-Wish Connecticut reached out to him, ready to make his dream come true. But Mikey’s dream was to “give” rather than “get.” He became the first recipient in the Connecticut chapter’s history to give away their wish.

Despite a frightening and uncertain future, Mikey was determined to make a difference in the lives of other kids with cancer. So, he loaded a cart full of portable electronics and personally delivered them to sick children desperate for a way to escape the fear, boredom and isolation of their hospital beds. Thus, the first Mikey’s Way Day was born.

“Mikey was a big believer in the mind-body connection,” remarked Les Friedman, CEO of Mikey’s Way and Mikey’s Dad. "Mikey knew from his own cancer experience that keeping your mind off treatment really does make you feel better.”

Sadly, Mikey lost his battle with cancer in October of 2008, but not before he was able to see the impact of his vision on other young cancer patients.

Fifteen years after he made his “Wish”, Mikey’s vision for helping kids cope with cancer is stronger than ever. The Foundation he began in 2005 has served over 8,200 pediatric cancer patients in 70 hospitals across 21 states nationwide.

“The laptop that Mikey’s Way Foundation gave Emily has made my girl smile more than I’ve seen in a while,” reports Erika Alvarez, the mother of a Mikey’s Way gift recipient. “This is Emily’s second leukemia diagnosis and she has been in treatment for nearly 2 1/2 years. I so love to hear her laughing while getting chemo.”