The Denver Auditorium Hosted The First Live Led Zeppelin Concert in the U.S. on December 26, 1968. To Honor This Occasion, Feyline and The Pineapple Agency Collaborate With City and County of Denver to Proclaim the Day “Led Zeppelin Day.” 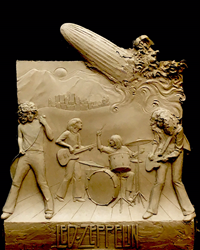 Today is the 50th anniversary of the first live performance of English rock legends Led Zeppelin in the U.S., which occurred at the Denver Auditorium on December 26, 1968. To commemorate this date as one of the most important moments in rock and roll history, the City and County of Denver’s Mayor Office has proclaimed December 26th Led Zeppelin Day, where a plaque will be presented to the Colorado Music Hall of Fame at an upcoming special event in 2019.

Fans of the iconic band may not know the Denver Auditorium was the first venue to host Led Zeppelin in America. At the time, late concert promoter Barry Fey almost turned down the act. In order to convince Fey, headline act Vanilla Fudge paid half the cost to book Led Zeppelin, adding them to the lineup just 10 days prior to the show. Many in the crowd had no idea the group was added. Those who were there were reportedly so impressed they flooded the local FM rock station KLZ with calls requesting to hear the band.

"Congratulations to Colorado music fans and the family of concert promoter Barry Fey (inducted in 2012) for the Mayor and City of Denver's proclamation designating December 26, 2018 as Led Zeppelin Day commemorating the band's legendary 1st U.S. appearance right here in Denver in 1968,” said Chris Daniels, Executive Director of the Colorado Music Hall of Fame. “Thanks to the Mayor for helping to promote the long history of music in Colorado and to the family of Barry Fey, who had the vision to bring a young British band to Colorado for their debut concert in the U.S. They opened for Vanilla Fudge at the old Denver Auditorium. Back then tickets were just $5 and the band was paid a total of $1,500, half of which came from Vanilla Fudge's proceeds from the concert. The Colorado Music Hall of Fame presented by Comfort Dental will be proud and honored to display the plaque at our home at the Trading Post at Red Rocks."

The day will be commemorated in many ways. A local artist has created and dedicated a sculpture depicting the band’s live performance to be permanently displayed at the Colorado Music Hall Of Fame at Red Rocks Amphitheatre. In 2019, the concert promotion company Feyline and local experiential marketing firm The Pineapple Agency aim to produce a special event to honor the anniversary. Details are still forthcoming but may include such immersive features as a Led Zeppelin memorabilia exhibit and guest appearances.