Narrated by acclaimed Shakespearean actor, Nigel Gore, the story of Jamestown is recollected through the experiences of Captain John Smith. 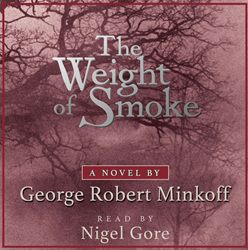 The Weight of Smoke. A Novel by George Robert Minkoff. Read by Nigel Gore

One of my objectives in writing the book was to tell the complete story of John Smith, who lived one of the most spectacular lives in English history. He was, in truth, the first American tragic hero.

This year celebrates the 400th anniversary of several important historical events in Jamestown, the first surviving colony in the New World, and the first to have a representative assembly, beginning the irrevocable course from colony to independent nation. In honor of this historic year in American history, George Robert Minkoff is releasing “The Weight of Smoke,” the first acclaimed historical fiction novel in his Land of Whispers trilogy series, as an audiobook narrated by renowned Shakespearean actor, Nigel Gore. Gore’s narration gives Minkoff’s language the dramatic lyricism of the English Stage.

Noted as an evocative historical fiction masterpiece, “The Weight of Smoke” is being released as an audiobook to give further depth and engagement to listeners who treasure American history. Step back in time and sense the auditory connection fusing past and present, while a pivotal moment in U.S. history is narrated. The storytelling captures the nation-making events of 400 years past. Recounted by Nigel Gore, his magnetic vocal performance brings another level of depth to Minkoff’s story, elevating it from print through the thoughts and voices of unforgettable characters.

The novel chronicles the lives of Captain John Smith, Powhatan, and Pocahontas, as they assume their true identities. The far-ranging saga explores the beginnings of the British Empire, and in particular how the English came to the New World to create a Utopia, and instead founded a slave state.

Author George Robert Minkoff says, “One of my objectives in writing the book was to tell the complete story of John Smith, who lived one of the most spectacular lives in English history. He was, in truth, the first American tragic hero. He saved the colony. He dealt with great humanity with the Native Americans, who learned to respect him above all other Englishmen. When Pocahontas went to England, she brought with her several important members of the Native American tribes of the Chesapeake, whose purpose was to discover if Smith was still alive. Powhatan, Pocahontas’ father, needed Smith to protect him from the English. For all the good that Smith did, he received no rewards from the English colony: no land, no stipend, nothing. His only reward was to be slandered and forgotten.”

Presented as the final work of the famous explorer and author, Captain John Smith, “The Weight of Smoke” details the disastrous first two decades of the Jamestown colony. Entwined with the colony's fractious beginnings are the adventures of Sir Francis Drake, retold around the campfires by an old alchemist, Jonas Profit, who sailed the Spanish Main with Queen Elizabeth's great navigator. Drake’s vision haunts Smith, both in the land and in his humanitarian quests. In Jamestown, Smith finds himself at the center of a desperate clash for survival; the struggle involves him in the mysteries of an unknown land—the New World. Richly written with metaphorical dynamism, flavored with Elizabethan authenticity, and now read by the introspective and powerfully articulate Gore, the audiobook captivates audiences with language and imagination, as the colonial turmoil permeates the senses.

Presented as a first-person manuscript measuring the fall of humanity, the audiobook graciously reminds us that “all failures are failures of the soul.” In Jamestown, the naïve notion of the privileges of birth clashes with Smith’s own feelings about the worth of an individual based on work, ambition, and talent. Anecdotes about New World trade routes and goods, such as the influence of tobacco for both recreation and medicine, add another dimension of relatability, reminding the reader of societal developments. “The Weight of Smoke” is a story chronicling the formation of the American character.

Referring to In the Land of Whispers as a trilogy, narrator Nigel Gore says, “The books are a wonderful mix of brilliant perception, in-depth historical research, and a thrilling narrative. Throughout, global and corporate politics blend with courageous human endeavor and adventuring on the high seas, all set against the backdrop of the discovery and founding of America. George has created a language that always is brilliant and surprising.”

“The Weight of Smoke” audiobook trilogy can be purchased online here. For information regarding George Robert Minkoff, visit georgeminkoff.com. For press or review inquiries, contact Olga Gonzalez at info(at)pietrapr.com, or call 212-913-9761.