“In God We Trust”: New Whitman Publishing Book Explores the Civil War and Its Effects on American Money, Banking, and Religion

The national motto “In God We Trust” debuted on United States coinage during the chaos and heartache of the American Civil War. William Bierly shows how the upheaval of the Civil War changed not just the face of our coins and paper currency, but the very foundations of modern American banking and finance. 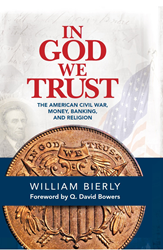 "In God We Trust" explores the influence of the Civil War, religion, and politics on American money.

One of the most fascinating books in American history.

Whitman Publishing announces the release of 'In God We Trust: The American Civil War, Money, Banking, and Religion,' by William Bierly. The 352-page hardcover book will release in November 2019. It will be available from booksellers and hobby shops nationwide, and online (including at [http://www.Whitman.com), for $29.95.

The national motto “In God We Trust” debuted on United States coinage during the chaos and heartache of the American Civil War. It has appeared on our money ever since. Bierly, digging deep into the origins and history of “In God We Trust,” tells its full story for the first time, introducing Reverend Mark Watkinson, the preacher who inspired the Treasury Department to “recognize Almighty God in some form on our coins” . . . Mint Director James Pollock, former governor of Pennsylvania, “a commanding figure” who worked toward the same vision . . . and Treasury Secretary Salmon P. Chase, nephew of an Episcopal bishop, who marshalled the nation’s vast resources and financed the war with bold innovations. President Abraham Lincoln figures in the tale, as does a cast of military generals, wealthy industrialists, poets and artists, powerful bankers, and everyday Americans, North and South.

Bierly shows how the upheaval of the Civil War changed not just the face of our coins and paper currency, but the very foundations of modern American banking and finance.

The story continues into the renaissance of beautiful American coinage started by President Theodore Roosevelt in the early 1900s . . . the religious revival of the 1950s, and the “Unwritten Constitution” . . . legal challenges by modern-day atheists . . . and controversy surrounding “In God We Trust,” public and school prayer, Ceremonial Deism, the separation of Church and State, and other topics very relevant in today’s social and political conversations.

Historian Q. David Bowers, former president of the American Numismatic Association, calls 'In God We Trust' “One of the most detailed, intricate, and fascinating books in the field of American numismatics—and in American history in general.” On the author’s style, Bowers says, “Bierly approaches the subject respectfully on all sides, with color, personality, dashes of humor, and dogged pursuit of the truth.”

William (Bill) Bierly was raised on a farm near Walkerton, Indiana. As a child he heard stories from his grandparents about two of his great-grandfathers who had served in the Civil War. This led to a lifelong interest in that war and that period of history. At about age eight he began collecting coins from circulating change. Following high school Bierly attended Northwestern University for two years and then completed a degree in sociology and economic development with a minor in Chinese studies at Indiana University. He then worked in India for two years as a Peace Corps volunteer in a dairy development project. Back in the United States his interest in coins was rekindled. He soon went abroad again, working for three years in Osaka, Japan. Then in the United States he operated a small business for five years, sold it, and entered graduate school, earning an MBA in finance from Indiana University and embarking on a 25-year career in commercial banking. With his overseas experience Bierly focused on international banking, particularly Japanese corporate business and Asian correspondent banking. He began his career at National Bank of Detroit and he worked with J.P. Morgan Chase for much of his career; at various times at the bank’s Detroit, Chicago, and Columbus, Ohio, offices, as well as traveling often to Asia.

Bierly resides in LaPorte, Indiana. He has two children, Emma and Ken, as well as a granddaughter, Kiki.

Whitman Publishing is the world’s leading producer of numismatic reference books, supplies, and products to display and store coins and paper money. The company’s high-quality books educate readers in the rich, colorful history of American and world coinage and currency, and teach how to build great collections. Archival-quality Whitman folders, albums, cases, and other holders keep collectibles safe and allow them to be shown off to friends and family.
Whitman Publishing is the Official Supplier of the American Numismatic Association. As a benefit of membership in the ANA, members can borrow "In God We Trust" (and other Whitman books) for free from the Association’s Dwight N. Manley Numismatic Library, and also receive 10% off all Whitman purchases. Details are at http://www.money.org.

The call for a national motto acknowledging God on U.S. coins came partly in reaction to the Confederacy's "god-fearing" new Constitution.Chapter-opener spread, chapter 1

William Bierly tells about the clergymen, politicians, and others who fought for (and against) the national motto.Chapter-opener spread, chapter 3

The Civil War had profound effects on the American economy; gold, silver, and copper coins were hoarded as citizens feared an economic collapse, and before long there were no coins in circulation.Chapter-opener spread, chapter 8

President Theodore Roosevelt argued it was sacrilege to put God on U.S. money; he was raked over the coals for removing "In God We Trust" from the nation's gold coins.Chapter-opener spread, chapter 17

Since a national religious revival in the 1950s, critics have pushed to remove "In God We Trust" from America's coins and paper currency.Chapter-opener spread, chapter 20