Pacific Islanders in Communication reflects on the life and legacy of late-Executive Director, Leanne Ferrer 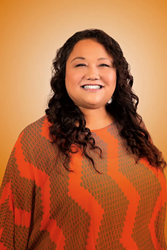 “It is most critical to keep supporting content creators in telling Pacific Islander stories. Without storytellers, we can’t continue to preserve our heritage through the language of multimedia.” Leanne Ferrer

Leanne Kaʻiulani Ellen Kang Ferrer was a force of nature.

An inspiring and tireless leader, storyteller, mother, friend, advocate, and visionary, Leanne was a beacon for the independent film community in Hawaiʻi, across the Pacific, and beyond. She passed away earlier in August surrounded by family and friends. The loss of her presence is profound. We send her husband, daughter and son our deepest appreciation for sharing her with us.

Leanne left an indelible mark on Hawaiʻi and countless Pacific Islander media artists, as well as partners and collaborators across the film community. The legacy of her impact lives on in innumerable spaces: from Pacific Islanders in Communication (PIC), where she was Executive Director, to the Hawaiian Media Makers that she spearheaded, to her early years at PBS Hawai'i. She nurtured and influenced the likes of Chelsea Winstanley, Heperi Mita, Heather Giugni, Sergio Rapu, Alika Maikau, Ciara Lacy, Lisette Marie Flanary, Ty Sanga, Kumu Hina, Erin Lau, and many more. Leanne’s legacy lives on in the many people whom she cared for and nurtured.

Leanne joined PIC in 2008 as a program manager, became the director of programming and in 2013 ascended to the role of Executive Director. In her 13 years of service she was a passionate advocate for public media, its critical role in a democratic society and its power to inform, educate and engage communities across the country. With her passion, Leanne navigated PIC to new horizons with a particular focus on normalizing Pacific Islander stories as part of America's, and the world's, growing ethnic and cultural diversity. She co-created Pacific Heartbeat, the only public television series by and about Pacific Islander people, culture and experiences, which has been running for 10 years. Leanne oversaw numerous productions in partnership with the National Multicultural Alliance, PBS, the WORLD Channel, American Public Television and the National Educational Telecommunications Association. As the digital world opened up to audiences far and wide, Pacific Pulse was born to showcase Pacific Islander stories and talent through innovative short films. Leanne’s realization that connecting media makers to network and share knowledge was of the utmost importance to supporting a thriving creative community, which resulted in the PIC Media Makers Summit, Hawaiian Handbook for Media Protocol and the Hawaiian Media Makers Database.

Prior to joining PIC, Leanne worked for Disney Films and PBS Hawai'i. She also served as the previous Board President for Hawaiʻi Women in Filmmaking, founding member and advisory board member of the Hawaiian Media Makers and the Hawaiʻi Film Foundation at Nuʻumealani.

Through everything that she did, Leanne led with love, conviction, compassion and generosity. In a recent interview, Leanne said, “It is most critical to keep supporting content creators in telling Pacific Islander stories. Without storytellers, we can’t continue to preserve our heritage through the language of multimedia.”

Though we grieve, the PIC family is also celebrating Leanne’s life and legacy by continuing to be champions and advocates for Pacific Islander makers and content. Leanne had a vision for a thriving Pacific Island media landscape that’s fair, inclusive, and equitable for Pacific Islander media makers in front of and behind the camera. Like Leanne, our work will be carried forward with authenticity, compassion, care, and aloha.

More About Leanne:
To read more about Leanne and her life visit: https://www.alohaforleanne.com/

For a tribute from PIC’s Board member, Regina Meredith, visit: https://youtu.be/mE6tiWikgCg

Thoughts & Reflections from Leanne’s colleagues, collaborators, and friends:
“I consider Leanne a dear friend and one of the greatest collaborators I have ever had the honor of working with. Our co-creation of Pacific Heartbeat is without a doubt one of the brightest moments of my career. Leanne had a big heart, which she always shared openly and generously. She was a tireless champion for Pacific Islander storytellers across the globe.”
~ Robert Pennybacker, VP, Learning Initiatives, PBS Hawai'i

“As the leader of Pacific Islanders in Communication, Leanne Ka’iulani Ferrer was an outspoken advocate for the representation of Pacific Islanders in public media. For nearly a decade, she was a prominent member of the National MultiCultural Alliance (NMCA), where her impact extended to the representation of the entire BIPOC community. We will miss her bottomless generosity, her warm and boisterous laugh, and her critical and thoughtful insight. We deeply mourn the loss of our colleague and friend, but Leanne’s legacy is a reminder that cultural diversity benefits us all. The NMCA expresses its sincere condolences to Leanne’s family, friends, and colleagues.”
~ National MultiCultural Alliance

“Leanne was my daily dose of inspiration. She gave us the opportunity to reach our greatest potential. And she always made me laugh.”
~ Heather Giugni, filmmaker

“The world is lightening with a flaming soul. With Leanne's passing, the Pacific audiovisual community has lost one of its most ardent defenders. She was an amazing woman and still is, through her legacy. Committed, voluntary and with exceptional kindness. A typically Oceanian and unfailing humor, laugh and smile. She devoted her whole life to hard work to value and promote the indigenous audiovisual industry, by indigenous people. May her convictions turn into legacy for all of us who suffer tremendously from her loss.
'Ia maita'i i tō 'oe tere e Leanne. E mihi atu mātou 'ia 'oe. 'A fano ma te hau."
~ Mareva Leu, Festival Director, FIFO

“I just wanted to acknowledge the immense support that she [Leanne] gave me... the tools, training, and connections to be doing what I am today. Beyond that, the emotional support you've all provided in navigating an industry that is just now seeing the value of our BIPOC voices has been immense.”
~ Sergio M. Rapu, filmmaker

"IDA will miss Leanne. She was a tireless advocate for the Pacific Island community and committed to ensuring the community's fair and accurate representation in front of and behind the camera. Her role has been vital to helping our nation and the world understand the Pacific Island experience and integrating that experience into the global nonfiction narrative. Her passing is felt deeply by IDA and the documentary community. But know that her impact is timeless.”
~ Rick Perez, Executive Director, International Documentary Association

“​​I was 16 years old when I first met Leanne through Pacific Islanders in Communications. She was one of the first people to give me an opportunity in film and who made me feel worthy of this path.”
~ Erin Lau, filmmaker

“The first time I met her was on a visit to the PIC office. She was so warm and welcoming, and I will never forget---barefoot! I remember thinking...that is how I work in the office, and how I always love to work! It was refreshing to see an executive doing the same. We talked story, and I left feeling inspired, thinking she exuded aloha in a way we all should aspire to.”
~ Lauren Kawana, filmmaker

“I was reflecting on the first time I met Leanne, when she visited our office in 2013 to talk to the staff about PIC during one of our Knowledge Sharing presentations. Her visit made such a deep impression on me and to this day I still think back on that visit every time I learn about and see a program with PIC support; I think about how passionate she was about supporting Pacific Islander filmmakers and stories. Most of all, I appreciated her warm personality and generous spirit — I think she could tell I was more nervous as a host than she was as a guest speaker, so she put me at ease by making the event feel more like a family visit.”
~ Michael Kinomoto, Supervising Producer, ITVS

“AmDoc mourns the loss of Leanne Ferrer, executive director of PIC and fearless champion for Pasifika stories on screen. Several of us have worked closely with Leanne over the years, whether programming films for public media or producing events and convenings around the country. We will remember her true aloha spirit and are proud to be part of her legacy of sharing Pacific Islander stories with audiences everywhere. Mahalo, Leanne!”
~ American Documentary

“Leanne treated all the people in her life with compassion and understanding, and her work with the utmost dedication and care. Her enthusiasm, infectious smile, and contributions to public media will long be remembered and inspire all of us at CPB for years to come.”
~ Pat Harrison, CPB President and CEO