The dating scene has drastically transformed in the past decade, forcing singles to put up with crude behavior and detachment. Mentor Sharoney, relationship expert and eight times international bestselling author of two relationship books, is here to disrupt women’s outdated perceptions on finding love in this modern digital age—by pushing them to ditch their bad dating habits and inspire other women to the same. 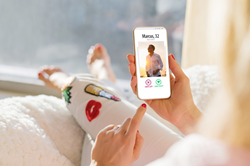 Digitized dating is here to stay, research indicating that 7 in 10 couples find each other online and not in real life. Now, more than ever, women need to reassess their dating habits and change the digital dating status-quo.

Online dating apps are soaring in popularity with 40% of the dating population meeting online. (1) As dating apps heavily saturate the ‘dating market,’ many women question the safety, success and ethicality of getting involved in these digital courting methods. Mentor Sharoney, a former relationship columnist for Cosmopolitan Israel Magazine, urges women to reconstruct their dating methods in a time where “Netflix and Chill” offers are favored over the classic coffee or dinner date. “The rules are still much more influenced by men,” says Mentor Sharoney. “They talk about sex in the first few texts, they invite women to their homes on the first or second date and ask if they can spend the night on the third since he is too tired to drive home. Wedding? –Oh, he isn’t sure about commitment yet.” Online dating condones destigmatizing rude and impolite behavior, where women are ghosted if they don’t respond to nude photo requests. Now, more than ever, women need to reassess their dating habits and change the digital dating status-quo.

Digitized dating is here to stay, research indicating that 7 in 10 couples find each other online and not in real life. (2) In fact, according to the Pew Research Center report on online dating, 30% of U.S. adults have used a dating app or website, though a small number, 12%, said they found a long-term relationship via online dating. And although, most reported an overall positive experience with online dating, further data subsets revealed specific issues around harassment. This included 37% of users experiencing continued contact after they said they were not interested, 35% receiving an explicit message or image they didn’t ask for and 28% were called an offensive name. A reduced percentage (9%) said they received threats of physical harm. (3)

In addition, emotional liabilities are also on record. According to Cosmo, many women are wasting time on deception, as 51% of Cosmo readers have gone out with someone who didn’t look anything like their pictures. (2) This “catfish” can involve women unknowingly connecting to married men, teenagers pretending to be in their 30’s and more. This further causes loss of time and hinders success rates of finding a long-term relationship.

Ease of phone apps also increase swiping action, further desensitizing the emotional act of dating. In fact, globally, more than 57 million people use Tinder — the biggest dating app. (3) Tinder does, however, limit users to 100 right swipes per day, an action a user takes to reject a potential match. Online dating however, in turn, does give women more control, which can be positive according to Cosmo. (1)

Though women have more control in dating, Mentor Sharoney still believes women to step outside of the dating status-quo and practice better habits:

(1) Don’t encourage bad behavior amongst your peer groups. For example, if a friend shows you a message she received with an explicit or racy image, don’t condone it. Mentor Sharoney advises, instead of saying, “Oh girl, he is hot!” respond with, “No, that’s not okay.” Have the friend vocalize, “I don't think you should be sending me this picture."

(2) Collectively as women we must be honest with our true expectations in order to change dating stigmas. Too often we mask our feelings and hide our true intentions for our future partner. Mentor Sharoney warns, do not change your profile just so it will fit “what guys want.” For example, don’t try to sound easy-going and “not sure what you want,” when in reality, you want to get married and have a family.

(3) Be holistic when searching for a partner. Examine how a dating prospect can fit your needs, not just wants. For example, to the woman who chooses a doctor just for his title, realizing later that he does not have time for family needs and the relationship is unfulfilling.

Overall, we must empower each other to shift the dating climate and create a mass demand for personal respect that all women can claim together.

Mentor Sharoney, is an eighth times bestselling author of two books: "What She Wants" and "Why (He Loves) Her and Not You?" She has earned over two decades of success, mentoring both men and women in relationship development and communication. A native Israeli born with a burning passion to help people conquer their dreams, build their self-esteem, and find success within their lives and careers, Mentor Sharoney was also a relationship columnist for Cosmopolitan Israel Magazine. In her multifaceted role as a successful TV host, radio personality, author, and 15-year sole proprietor of two thriving businesses, she remains focused on delivering highly effective seminars dedicated to relationships and mentorship. Mentor Sharoney holds a degree in law and psychology. http://www.sharoneyred.com