Inaugural "Contemporary Modest Fashion Event" To Be Hosted by Al-Nisa Designs In Bevery Hills, CA May 28-31, 2020: "Fashion Is An Ambassador To World Peace" 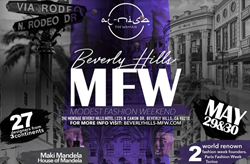 "Fashion is the Ambassador to World Peace"

International VIPs, Fashionistas, Buyers and Global Media will all converge in the city of Beverly Hills to be a part of BHFWE. Come and meet the new faces of top emerging designers from around the world: Italy’s Torino Fashion Week founder Claudio Azzolini, listed as one of the Top 500 “who’s who” in the Islamic 500 Magazine 2018 & 2019 editions (considered to be the Middle Eastern version of a Forbes 500 magazine); DK Ambassador Paris Fashion Week founder Djamilah Kuerdon; and South Africa’s House of Mandela CEO Maki Mandela, eldest daughter of our former beloved President Nelson Mandela, are all industry partners and supporters of BHFWE.

The theme for the BHFWE is “Fashion is An Ambassador to World Peace.” “This statement is no cliché,” states Carmen Muhammad, “modest fashion is a mission.” With over 27 designers from around the world, including a South African Slot (delegation) of 10 emerging designers, this event represents true diversity and inclusion in the exciting business of fashion.

The mission is simple: To provide emerging designers and modest models with a platform that connects them to key individuals in the business of fashion while expanding their global outreach, and provide new editorial opportunities and content along with e-commerce business opportunities.

Carmen W. Muhammad, a native of Los Angeles, has become a designer of great interest at international fashion week events. With over seven appearances at various international high-profile fashion week events and top awards, the list of achievements is plentiful. At her first appearance in Torino, Italy, she not only went viral after a published article in the UAE National newspaper titled “Pink Hijab Ladies Steal The Show at Torino Fashion Week,” but she was the only African American designer, and received the Louis Vuitton Brand Ambassador Award and the At Film Awards 2017. Later in the year, she was invited to the first Pret-A-Cover™ event hosted by Powerhouse Founder of the Islamic Design Council Alia Khan, who is also listed in both editions of the Islamic 500 Magazine. In her return to Torino Fashion Week in 2018, she again clinched the top award with an invite to appear at the first Milan Fashion Week Soiree which included Al-Nisa

Designs being inducted into the Milan Fashion Library historical records as an emerging modest designer. Among additional accomplishments in 2018 include the showcasing of Al-Nisa Designs in a world museum exhibit titled “Contemporary Muslim Fashion” which opened at DeYoung Museum in San Francisco, Calif., in September of that year; the exhibit then traveled to Museum Angewandte Kunst in Frankfurt, Germany in April 2019. And on February 28, 2020, the exhibit is scheduled to open at the Cooper Hewitt Smithsonian Design Museum in New York where Ms. Muhammad is also featured in a documentary filmed to accompany the final exhibit.