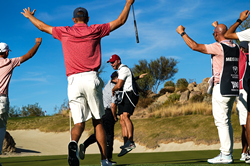 The talent and character these young guys displayed was nothing short of exceptional and our celebs, well, they weren’t half bad themselves. Combined with the opportunity to make a positive impact for two top-notch charities, I’d say the PXG College Golf Showcase nailed it!

The inaugural PXG College Golf Showcase at Scottsdale National debuted last night on GOLF Channel. The nineteen-hole charity exhibition shootout between four elite college golfers and four celebrities provided fast-paced fun, great commentary, and an excellent competition. In the end, Team Rubicon landed at the top of the leader board, posting $530,000 in charity skins versus Team Semper Fi who secured $470,000. The million-dollar pot benefitting the two military non-profits was awarded by The Bob & Renee Parsons Foundation.

The competition came down to the final holes, with a riveting birdie, eagle, eagle finish by Team Semper Fi & America’s Fund on the final three holes. After falling behind by more than $300,000, Rob Riggle led the charge with a near hole-in-one on the 16th hole and then drained a 60-foot putt on the final hole for eagle to add another $100,000 to the team’s winnings. Over the last three holes, Team Semper Fi & America’s Fund made $335,000 of their $470,000 total!

“We couldn’t have planned a better end to what was an outstanding day on The Other Course at Scottsdale National,” PXG and Scottsdale National founder Bob Parsons shared. “The talent and character these young guys displayed was nothing short of exceptional and our celebs, well, they weren’t half bad themselves. Combined with the opportunity to make a positive impact for two top-notch charities, I’d say the PXG College Golf Showcase nailed it! We are proud to have been part of the inaugural event and look forward to next year.”

In addition to the competition on the course, the show focused on the new PGA TOUR University program and its innovative strategy to provide access to the Korn Ferry Tour and International Tours for top four-year college players. Proving the point that today’s elite college golfers are ready for the professional ranks, Austin Eckroat finished 12th at the PGA TOUR’s Mayakoba Classic on a sponsor’s invite just two weeks prior to the College Golf Showcase airing.

“We were so fortunate to be able to pull this together, especially in the crazy year that was 2020,” said Drew Carr of Fidelity Sports Group. “The opportunity to produce a new and fun approach to golf, while also elevating PGA TOUR University and college golf, was one we were grateful for. We could not have accomplished it without great partners and supporters at the PGA TOUR, Golf Channel, PXG, Scottsdale National, Sneaky Big Studios and Toro. We are so looking forward to another great event in 2021!”

“This was a very special event and a great advertisement for the players and product of college golf. And, what a credit to the games of the celebrities who hit some unbelievable shots under pressure. This event knocked it out the park at every turn in its first year,” said Oklahoma State Coach Alan Bratton, who’s Cowboys won the 2018 National Championship and who’s former students, Matthew Wolff and Viktor Hovland, have recently won on the PGA TOUR.

The 2020 PXG College Showcase at Scottsdale National was conducted without spectators. All individuals on-site at the exclusive Scottsdale National Golf Club for the event were tested for COVID-19 and all 172 people tested received a negative result.

ABOUT THE BOB & RENEE PARSONS FOUNDATION
The Bob & Renee Parsons Foundation offers support to nonprofit organizations successfully working to empower, educate, nurture and nourish people during what is often the darkest time of their lives. Founded in 2012 by philanthropists and business leaders Bob and Renee Parsons to provide hope and life-changing assistance to the country’s most vulnerable populations, The Bob & Renee Parsons Foundation offers critical funding at critical times to those in need. The Foundation’s giving is driven by the core belief that all people – regardless of race, religion, roots, economic status, sexual orientation or gender identity – deserve access to quality healthcare, education and a safe place to call home. Follow @WeDealInHope on social media or visit TBRPF.org, to learn more about partner organizations and the important work being done in the community.

ABOUT PGA TOUR UNIVERSITY
PGA TOUR University is a program designed to strengthen and elevate the path to the PGA TOUR through the Korn Ferry Tour, Mackenzie Tour – PGA TOUR Canada, PGA TOUR Latinoamérica and PGA TOUR Series – China. This program will reward elite collegiate play with varying levels of playing access to Tours operated under the PGA TOUR umbrella, while upholding the principles and virtues of collegiate athletics.

ABOUT SCOTTSDALE NATIONAL
An exclusive, members only oasis in the Sonoran Desert, Scottsdale National Golf Club presents golf the way it should be played. No tee times required. Wide open fairways across forty-five holes with no homes lining the courses. Supported by two distinctive clubhouses with stunning views and unexpected amenities. Fifteen luxurious member Villas with sixty tastefully appointed rooms, surrounded by three million acres of government protected desert land in the center of magnificent vistas. And just one rule, established by club owners Bob and Renee Parsons, “No member shall ever impinge upon another member's enjoyment of the club.”