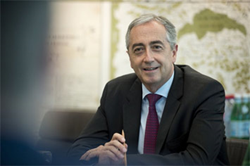 “Our leadership team is significantly deeper with the addition of Stefan and Melanie to our BOD, and Joseph as our new CTO,” said Kevin Murphy, CEO of Incredible Foods.

Incredible Foods, Inc., maker of the perfectlyfree® family of plant-based allergy-friendly foods, today announced additions to its leadership team, including Dr. Stefan Catsicas -- the recently retired chief technology officer (CTO) of Nestlé S.A. -- as a member of the company’s Board of Directors (BOD). The company announced that CPG entrepreneur Melanie Kahn has also joined its BOD and that food industry veteran Dr. Joseph J. Speroni has been named CTO.

“Our leadership team is significantly deeper with the addition of Stefan and Melanie to our BOD, and Joseph as our new CTO,” said Kevin Murphy, CEO of Incredible Foods. “These outstanding individuals have made, and continue to make, important contributions to the development and production of nutritious food products, and we’re excited to be working with them as we enter our next phase of growth.”

In addition to joining the company’s BOD, Dr. Catsicas is investing in Incredible Foods through the private firm Skyviews Life Science Ltd., which he cofounded. His distinguished career spans the corporate, academic and entrepreneurial sectors. Most recently, Dr. Catsicas served as CTO, EVP and a member of the Executive Board at Nestlé S.A., the world’s largest food company, where he was responsible for innovation, technology and R&D.

Previously, Dr. Catsicas served in a range of international executive and academic roles, including Chair of Cell Biology at the School of Medicine of Lausanne (Switzerland) and Vice President of Research at École Polytechnique Fédérale de Lausanne.

As the new CTO at Incredible Foods, Dr. Speroni -- who has served on the company’s board of advisors -- will lead the company’s effort to identify and engage emerging technologies and systems that enable sustainable growth. Previously, Dr. Speroni was VP of R&D, North America, for DSM Nutritional Products, a Dutch multinational active in the fields of health, nutrition and materials. He also worked in leadership research roles at The Coca-Cola Company and Ocean Spray Cranberries. Dr. Speroni has a Ph.D. in Food Science and a Master's Degree from Penn State and a B.S. in Chemistry and Biology from State University of New York College at Cortland. He has also been named an Alumni Fellow and an Outstanding Alumnus of Penn State.

An accomplished CPG marketing and branding executive, Ms. Kahn, also joining Incredible Foods BOD, is founder and CEO of start-up Poppilu, Inc. -- maker of a high antioxidant lemonade. Ms. Kahn had previously worked at Kraft Foods and premium spirits maker Beam Global. Prior to founding her own company, Ms. Kahn served as VP of marketing for innovative dairy start-up Fairlife LLC whose flagship product she developed and nationally launched under a joint venture with The Coca-Cola Company.

About perfectlyfree®
The perfectlyfree® brand is committed to creating delicious plant-based foods for anyone who desires a fuller, happier, healthier, free-from lifestyle. perfectlyfree® products contain only natural, premium ingredients that are non-GMO, gluten-free and free-from the top eight food allergens: dairy, wheat, peanuts, tree nuts* (contains coconut*), eggs, soy, fish and shellfish. All products are prepared in a dedicated free-from facility. For more information, please visit http://www.perfectlyfree.com. “Like” us on Facebook and follow us on Twitter and Instagram.