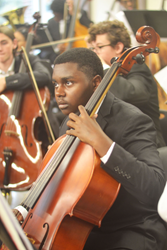 “We’re thrilled to recognize Ethan and his incredible dedication to music, and for breaking barriers in the world of classical music with this year’s scholarship,” said Wilshire Quinn Capital CEO Christopher M. Garcia.

Wilshire Quinn Capital, Inc. announces cellist Ethan Clay as the recipient of the annual $10,000 Wilshire Quinn Musical Arts Scholarship. Wilshire Quinn will apply the funds to his fall enrollment as a sophomore at Indiana University in Bloomington, Indiana.

Wilshire Quinn received more than 1,000 scholarship applications, each of which included personal statements and video performances.

Clay accepted an offer to join the prestigious Jacobs School of Music at Indiana University, one of the country’s best music schools, after receiving offers from 11 institutions. He has attended Indiana University since the fall of 2020 and is enrolled in the Bachelor of Music Education program, in which he focuses on studying the cello.

“We’re thrilled to recognize Ethan and his incredible dedication to music, and for breaking barriers in the world of classical music with this year’s scholarship,” said Wilshire Quinn Capital CEO Christopher M. Garcia. “His performance and personal statement were moving, and his accomplishments as a cellist throughout the years are notable. In reviewing his accomplishments and listening to him play the cello, we were reminded of music’s transcendental power and its unique ability to unify people from all walks of life—something that Ethan has strived to demonstrate throughout his career as a musician.”

Clay is an accomplished cellist originally from Chicago, Illinois who began playing the cello in fifth grade. As a junior in high school, Clay was selected for the prestigious honor of playing at Carnegie Hall as part of the renowned stage's Honors Performance Series. Clay's selection into the elite group was a nod to his years of dedication, achievement, and talent.

In addition to earning the honor to play at Carnegie Hall, Clay is an accomplished cellist on the local and state music scenes in Louisiana, participating in Zachary High School’s music programs and ensembles in addition to the Louisiana Youth Orchestra, where he served as assistant principal cellist. His talent and dedication also earned him the role of assistant principal cellist in 2019’s All-State Orchestra, first chair of the Multi-District Honor Orchestra, and an honored membership in the Baton Rouge High String and Symphony Orchestras.

“Classical music isn’t something that is commonly listened to in black communities, so the genre isn’t something I was naturally drawn to as a child,” Clay said. “My interest in classical music and the cello specifically, were ignited by Yo-Yo Ma. I listened to a recording of him, and I was awestruck. Since then, I’ve worked hard to improve my craft, driven by wanting to be as good as him while also letting other black classical musicians know there is space for them on the stage.”

About the Wilshire Quinn Scholarship

The Wilshire Quinn Musical Arts Scholarship, launched in 2019, is a $10,000 annual award presented to a qualified applicant who embodies leadership in the musical arts through talents and character. The scholarship’s funds are used directly for tuition, paid to the winner’s educational institution.

The application process involves a brief personal statement describing what music means to the candidate, and a videoed musical performance. Applications for the 2022 scholarship will open to applicants on April 1, 2022, and the winner will be announced on July 1, 2022.

Visit http://wilshirequinn.com/scholarship/ to learn more about the award and application process.

For more information about the Wilshire Quinn Scholarship or media inquiries, please contact us at info@wilshirequinn.com or 619-872-6000.