The alt-rock band Indio Ink has released a music video on YouTube to accompany their second single, ‘RUNAWAY,’ available on all music streaming platforms. 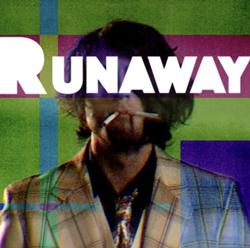 Releasing two weeks after the song, the retro aesthetic of the new ‘RUNAWAY’ music video, directed by Trevor Neuhoff, is a nostalgic nod to the 70s, taking the audience on a journey “running away” with the band. Indio Downey, the lead vocalist and guitarist of Indio Ink from Index Records label, co-wrote and produced ‘RUNAWAY’ with Jason Bell and Jordan Miller from The Heavy. The band’s second single has more of a subdued angst that grows into a cathartic dance party with the band members jumping on trampolines, running on treadmills, and dancing in front of a green screen while sporting colorful bell bottoms and patterned blouses, lending for another catchy hit. ‘RUNAWAY’ highlights how music can serve as an escape from the heartbreak of rejection, yielding for more of a slow ballad that contrasts with the upbeat tempo of the band’s first single, ‘HEADSPACE.’

Garnering over 150k streams on ‘HEADSPACE,’ and receiving placements on Spotify’s All New Rock, New Noise, and Fresh Finds playlists, among others, Indio Ink has already made waves in the streaming sphere. With a memorable music video to accompany the release of their abrasive yet catchy first single, Indio Ink quickly rose to prominence, making a name for themselves in the alt-rock scene.

Lead singer Indio Downey accompanied by Emily Dickinson on the keyboard and with additional vocals, Cristóbal Mudgett on guitar, Jackson Morris on drums, and Alex Pitta on the bass, make up Indio Ink, the Los Angeles-based band with over 81k followers across their social media platforms. The band's unique instrumental arrangements are accompanied by front man Indio Downey's resonant vocals and lead guitar; together, it creates a sound that sets the band apart from anything else in the alternative rock genre. Indio Ink will be releasing multiple singles, leading to the highly anticipated release of an Indio Ink EP.