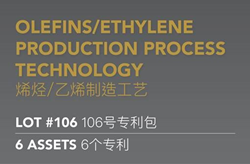 The patented technology is applicable to the industrial petrochemical production of olefins/ethylene and is relevant in a wide variety of industries, including oil drilling, surfactants, lubricants, agrochemicals, food packaging, pharmaceuticals, among others.

Ocean Tomo Transactions, LLC, will auction a portfolio of six patents for industrial petrochemical production of olefins/ethylene. Available as Ocean Tomo Bid-Ask™ Market patent auction lot 106, the patented technology is applicable to the industrial petrochemical production of olefins/ethylene. The inventions are applicable in a wide variety of industries, including oil drilling, surfactants, lubricants, agrochemicals, pharmaceuticals, among others.

Olefins, including ethylene, are major building blocks in the chemical process industries. Ethylene is produced commercially from petroleum and natural gas feedstocks in high-temperature furnaces by thermal cracking. There is an incentive to use methane as a raw material because of the vast reserves of natural gas throughout the world. The patent assets in this lot accomplish this objective while overcoming the inefficiencies characterizing conventional processes.

The assets in this patent portfolio on the Ocean Tomo Bid-Ask™ Market are novel and disclose three significant advancements. First, the production process of olefins/ethylene presented in the portfolio is robust and easy to install. Second, the process is integrated, economical to operate, and can reduce the inefficiencies characterizing conventional processes. Some patents of the present portfolio provide an option to produce olefins not being dependent on a catalyst; other patents provide an improved reactor method for the catalytic oxychlorination of an olefin hydrocarbon by using a catalyst. Commercial ethylene is used in the production of polyethylene and other polymers and the production of other industrial chemicals such as ethylene oxide, ethylene glycol, and ethylene dichloride.

According to the National Chemistry Council, ethylene is the largest volume organic chemical produced in the U.S. and globally. In 2018, the value of Ethylene Oxide produced in the U.S. was $3.5 billion, according to the National Chemistry Council. In addition, the production of primary chemical products derived from EO (“derivatives” or “downstream products”) was valued at $5.4 billion. In total, the combined value of EO and immediate derivatives production is $8.9 billion.

The growing automotive industry and rising consumer goods industry is expected to bolster the global light olefins market. The market was valued at USD 254.6 billion in 2016 and is expected to reach USD 475.8 billion by the end of 2023.

To request bidder credentials or for further information on this auction or other auctions on the Ocean Tomo Bid-Ask™ Market, contact Layna Guo at Layna@OTI.com or 1-312-327-8179.

The Ocean Tomo Bid-Ask Market is an open online platform to buy and sell patents. This market is an important step forward, both as a simplified solution for patent transactions as well as a source of information on patent pricing. The Ocean Tomo Bid-Ask Market uniquely combines the efficiency of an online platform with an experienced team of brokers fluent in both English and Mandarin. The market uses standard transaction documents and is open, transparent and free to view.