Author and recording artist Suca has released ‘Lost In A Maze: Volume I,’ the first installment of a new series that expands on the story contained within her hit single 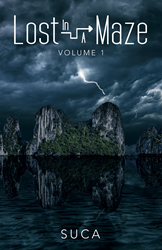 “Lost In A Maze: Volume I” By Suca

“We are all part of a huge family of the broken-hearted at one point or another, but we have to decide to rise from the ashes, heal ourselves and go on to do great things.”

When Sabrina moves from Jamaica to the United States at 16 years old, she has little to her name beside her dazzling beauty and breathtaking voice. To make ends meet, she takes a job at the estate of a wealthy and powerful businessman, immediately catching the attention of her employer’s two sons, Dan and Ison. Unbeknownst to Sabrina, Dan arranges to eliminate his competition for her heart, and Ison is soon sent overseas.

Over the years, Sabrina pursues a career in music and grows into a popular and beloved artist, all while remaining under Dan’s charming spell. The stars seemingly align when they become engaged, their beautiful love affair the remaining piece of the puzzle. However, the illusion Sabrina has built is shattered when she finds out that Dan has been keeping company on the side. As she devises a plan to expose him and his mistress, Ison too plots his own scheme to reunite with and win over Sabrina.

Moving from happily engaged to locked in a love triangle with two toxic brothers, Sabrina must decide for herself who she really is and who she really wants to be with. Inspired by her own experience with heartbreak, Suca aims to connect with those in similar circumstances and demonstrate that they are not responsible for how someone else mistreats them, only for how they decide to forge on.

“Mistakes, disappointments and heartaches come to us all,” said Suca. “We are all part of a huge family of the broken-hearted at one point or another, but we have to decide to rise from the ashes, heal ourselves and go on to do great things.”

A relatable and empowering story for anyone who has felt hurt or frustrated by love, “Lost In A Maze” reminds readers of their own strength and resilience and empowers them to prioritize themselves so that they can better determine what they want and need from a relationship.

About the author
Suca, aka “The Veiled Princess,” is an author, ghostwriter, regional recording artist, songwriter, and philanthropist of Jamaican and West African descent. She is also a member of the American Society of Composers, Authors and Publishers. She is widely known for her hit single, “Lost In A Maze,” and her music is being played in 63 countries. In 2019 and 2020, she topped the charts for 49 weeks in Jamaica, and in 2019, she ranked ninth for R&B in the world. The music video for “Lost In A Maze” has also gone viral, receiving 1.8 million views in six months. Now, she has released the first book in her new “Lost In A Maze” trilogy, which serves as a companion piece to the song. To learn more about Suca, please visit lostinamazesuca.com or connect with her on Instagram (@sucamusic_original) and Twitter (@sucamusic).