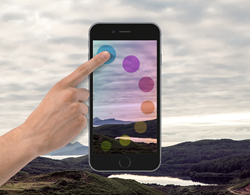 Touch the screen before you capture to discover infinite filters

We hope that the release of infltr will shake up the photo and video category and encourage more innovation - helping users take better pictures, faster.

infltr is a new camera app available now on the App Store. The name infltr is short for "infinite filters”. The app's patent-pending technologies let users add any one of more than five million filters to their images before they take a picture. Filters are changed in real-time using touch, allowing anyone to turn a hasty snap into a memorable shot in seconds and removing the need for preset filters or post production.

Two billion photos are taken and shared on mobile devices every single day. The explosion in mobile photography has in part been fuelled by the ability of users to add filters to their pictures. And yet, almost every single player in the photo and video space uses the exact same approach to filtering, namely:

Post-processing pictures on mobile in this conventional way interrupts the flow - after taking a shot users are stuck “in the phone” trying to decide on the right filter, not taking another picture or engaging with the world.

The lack of innovation in the mobile photography space is likely because real-time filtering is computationally intensive and crucially, no-one seems to have figured out the necessary user interface. A few applications such as Apple’s native camera app lets users apply a filter before they take a picture (only for photos and not for video) - but they still rely on a selection of preset filters.

With infltr, before taking a picture, users move their finger across the screen and the filter changes dynamically over the real-time camera view.

Keep panning in any direction and the filters keep changing - infinitely.

Once the user discovers a filter they like, they simply hit the ‘capture’ button. No post-processing of the image is required.

infltr’s unique approach has the benefit of:

Philippe Levieux, infltr cofounder, says; “At infltr, we’re passionate about mobile photography and improving user experience. Since Instagram launched in 2010, there’s been comparatively little innovation in the filtering space, despite its enormous popularity with users. We hope that the release of infltr will shake up the photo and video category and encourage more innovation - helping users take better pictures, faster.”

infltr presents a patent-pending ‘spatial filter spectrum’ where every point (or pixel) on the screen represents a different filter. It’s infinite because there’s no “end” to the spectrum - as you pan across the screen, you keep travelling the spectrum.

All processing is done in real-time on the GPU enabling computing in parallel on multiple cores. This approach has only been made possible in recent years, thanks to advances in mobile processing power.

infltr also features another patent-pending advance in the “adaptive User Interface’. User interface elements in the app constantly change colour in real-time to stand out against the camera view - removing the need for drop shadows, boxes or bright obtrusive colours.

infltr is a new camera app available for iOS devices (iPhone and iPad, iOS7 and above). Its patent-pending technologies allow users to add infinite filters before they take a picture using touch. Touch the screen in any direction to change the filter over the camera view. Keep panning in any direction to apply new filters - there are over five million individual filters to discover. infltr’s mission is to help users be more creative, to improve the experience of taking pictures on mobile and to save users time every time they take a picture. The app is available in English, French, Dutch and Spanish, with many more languages coming soon. The infltr team value your feedback so please rate the app or email the team at hello(at)infltr(dot)com.