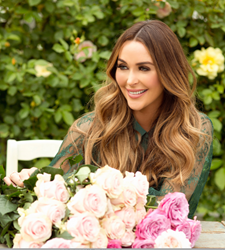 Since I was a little girl, I have always been drawn to flowers and have been perfecting my designs ever since. It's a dream come true to have teamed up with Marks Garden to bring you Bouquet Box. I'm so excited to share all I have learned throughout the years with you!

Celebrity How2Girl Courtney Sixx, and her team, are proud to announce the launch of Bouquet Box, the first to market DIY floral arranging system. After years of development, Courtney tested and co-designed the debut line with florist to the stars Mark’s Garden.

Courtney graces the carpets of endless celebrity events from which she loves to walk away with inspiration for future projects. She brings a wealth of skill, creativity and DIY history (with flowers especially) to the brand.

After successful careers in both modeling and film production, LA native Courtney returned to her greatest passion, DIY. Since then, she has been creating spectacular projects across Hollywood and beyond.

As a contributing editor for Martha Stewart, she produced editorial for entertaining, weddings and floral design. She even designed the flowers for her own wedding to Mötley Crüe’s Nikki Sixx, with Mark’s Garden. Mark’s Garden has worked on countless celebrity events like the Oscars and Golden Globes and the weddings of Justin Bieber and Hailey Baldwin, Ellen Degeneres and Portia De Rossi, Kanye West and Kim Kardashian, Beyonce and Jay-Z and more. Courtney loves working with Mark’s Garden who tasked her to represent their prolific design studio at a pre-Golden Globe show with televised interviews for national and local outlets.

As a lifestyle contributor, Courtney is a regular on Good Day LA and has appeared on many television shows, including Entertainment Tonight, where she joins the hosts to design projects and arrangements as well as presents DIY steps.

She also creates editorial for magazines including Glamour, Elle, People and US Weekly and appears on popular apps and podcasts with Kylie Jenner, Cindy Crawford, Heather Dubrow and Robin McGraw. Courtney is known for her widely popular iHeartRadio show where she provided tips on flowers and fashion to beauty and entertaining.

About Bouquet Box
Bouquet Box was created by DIY expert Courtney Sixx and the debut collection co-designed with celebrity florist, Mark Held of Mark’s Garden. Each monthly arrangement is inspired by displays from A-list events that Mark designed including those from the Oscars Governors Ball, the Golden Globes, movie premieres, celebrity weddings and other events. The idea of Bouquet Box is simple: Designed by us. Arranged by you. With each order, a complimentary Welcome Box including custom tools arrives first. Then, every month, the exact number of curated flowers for that month’s design is delivered fresh from farm partners, along with arrangement-specific photo how-to cards and exclusive access to video tutorials, starring Courtney, simple for even the novice floral arranger to follow. Designs are available in lush Classic size or larger Deluxe versions with additional blooms. Bouquet Box can be purchased individually or as seasonal or monthly subscriptions. Prices start at $99 for the system.